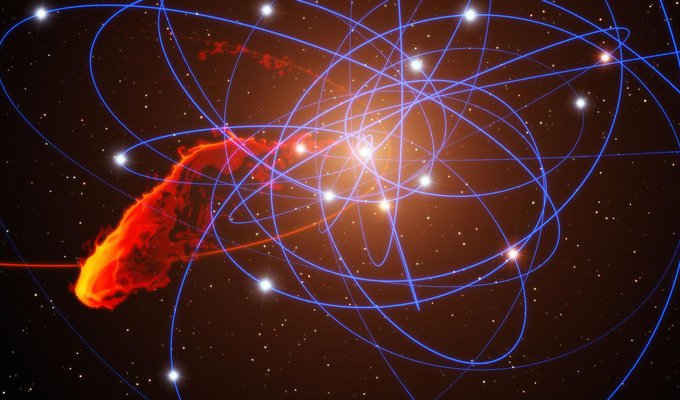 You’re probably wondering what on Earth is going on in this picture! Unlike many of the wonderful photos that we bring you in Space Scoop, this picture is an illustration drawn by an artist on a computer.

Such pictures aren’t conjured up by an artist’s imagination. Instead, these artists work with astronomers to accurately draw things in space that we can’t photograph.

For instance, the blue lines in this picture show the paths that stars follow as they orbit. (Just like planets, stars also move in elliptical orbits.) Obviously, these blue lines don’t really exist in space, like road markings, but an artist can draw them. Meanwhile, the red line shows the path that a huge cloud of gas is moving along.

But what are these stars and gas cloud orbiting around? This is where we come to the reason behind this new picture: Near the centre of the picture there is an invisible object called a Black Hole. These objects are invisible because they swallow-up anything that gets too close – even light! Astronomers know that some Black Holes are giants (called Super-Massive Black Holes) and that there is one of these in the centres of most galaxies.

Using a telescope called the Very Large Telescope, which is found in the country Chile in South America, astronomers recently discovered a cloud of gas accelerating towards the Super-Massive Black Hole at the centre of our Galaxy. This is the first time ever that astronomers have witnessed a cloud of gas approaching a Super-Massive Black Hole! The artist’s picture shows what astronomers think will happen to the gas cloud in the year 2021.

Astronomer Stefan Gillessen said: “The idea of an astronaut close to a Black Hole being stretched out to resemble spaghetti is familiar from science fiction. But we can now see this happening for real to the newly discovered cloud.”

Check out this great video, which simulates how the cloud of gas will be swallowed-up in the next few decades: click here.

The cloud of gas drawn in this picture is several times heavier than the Earth! That’s one huge ball of gas!

Beaming with the Light of Millions of Suns