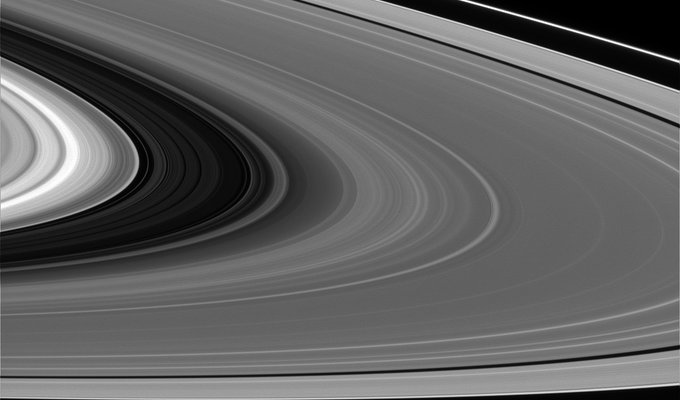 If you go outside on a dark, cloudless night, you could see up to five planets without a telescope. Mercury, Venus, Mars, Jupiter and Saturn can all be seen by the naked eye.

These planets have fascinated people for thousands of years, yet it wasn’t until the invention of the telescope that Saturn’s spectacular rings were first seen.

It would be another 400 years before detailed photographs of the rings were taken when the Voyager spacecraft visited the planet in the 1980s. They revealed that Saturn actually has several large rings made up of billions of bits of ice and rock, ranging in size from tiny, dust-sized grains to particles as large as mountains.

Today we know that Saturn has seven large rings, separated by empty gaps called ‘divisions’. But our understanding of Saturn’s rings is still evolving. A team of researchers recently managed to measure the brightness and temperature of Saturn's rings in more detail than ever.

They found that one ring appeared much brighter than its two neighbouring rings in thermal images, meaning it’s warmer. Strangely a gap called the ‘Cassini Division’ also shone brightly in the thermal images, revealing that it is more than just an empty space between rings.

We think these regions are warmer because they contain fewer particles, making it easier for the Sun to heat them. Plus, the particles are darker and therefore absorb more heat.

On the other hand, the Cassini division looks all but empty in normal images. While the neighbouring rings have more particles to reflect sunlight and appear brighter.

Scientists believe the rings made up of pieces of comets, asteroids or shattered moons that broke up before they reached the planet.

Machines Learn How to Dodge Asteroids

Cosmic Crashes Get Galaxies in a Spin