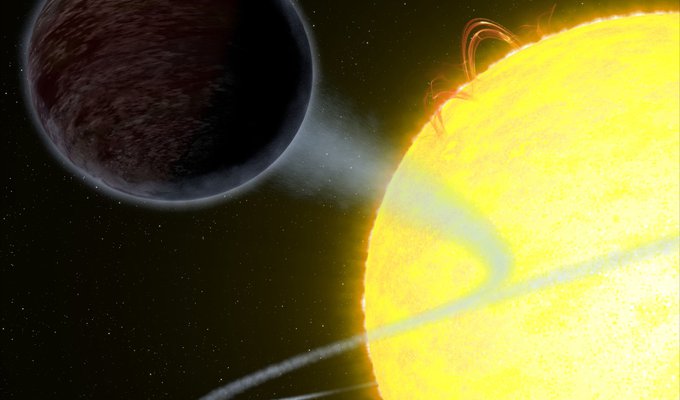 Exciting news for all werewolves, vampires and other creatures of the night – a pitch black planet has been discovered!

The new world is an “exoplanet”, which means it orbits a star far beyond our Solar System. So far, we've found more than 3500 exoplanets, and some of them are strange indeed.

There are worlds being ripped apart by their parent stars, while others are battered by winds moving at thousands of miles an hour. On one distant planet the surface is covered in burning ice!

In fact, it seems like the rarest planets in the Universe are those like our home, Earth.

So, why are we excited about this spooky black planet? Because it's amazing that we were able to work out its colour at all!

Exoplanets are so small and far away that it’s incredibly difficult to see them. It's pretty much impossible to make out any details.

Luckily, astronomers have a few tricks up their sleeves.

Exoplanets don’t make their own light, they simple reflect the light of their star. By measuring how much light the planet reflects, we can work out all sorts of details, including its colour.

Surfaces like snow and ice reflect a lot of light, while darker surfaces, like grass or tarmac, are less reflective.

The new planet is blacker than fresh asphalt and gobbles up most of the starlight that hits it. In fact, just 10% of light is reflected. To put that into perspective, our Moon reflects twice as much light.

The colour is down to the planet’s temperature, which reaches well over 2,000 degrees. The extreme heat affects the planet’s atmosphere and stops clouds forming, which would reflect more light.

The most reflective world in our Solar System is one of Saturn’s icy moons, called Enceladus ("en-SELL-ah-dus").  Our own Moon only reflects 14% of the light that hits it, whereas Enceladus reflects more than 99%!

The Warped Fabric of Our Universe