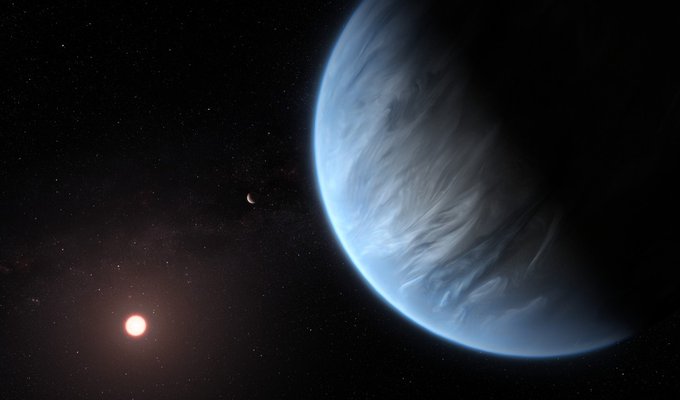 In an exciting discovery, water vapour has been found in the atmosphere of a distant planet known as K2-18b.

Because K2-18b is a planet outside our own solar system, it is known as an exoplanet.

Researchers from University College London used the Hubble Space Telescope to peer inside the atmosphere of planet K2-18b. They found promising signs of water vapour, hydrogen and helium in the planet’s atmosphere.

This is an exciting find because these are some of the common elements that we find here on Earth. Most importantly, the finding of liquid water helps astronomers study whether or not water it is common throughout the Universe. In other words, is Earth special?

Water can exist on K2-18b because it orbits its star at the right distance to make it possible for liquid water to exist. If the planet was too close to the star, the water would boil away, but it would freeze solid if the planet were too far from the heat of its star.

Even though this planet has water in its atmosphere, K2-18b is likely not a place you want to live. This planet is much heavier, has a different atmosphere, and orbits a red dwarf star. Despite what you may think, blue stars are much hotter than red stars. In fact, red stars are the coldest! These smallest red dwarfs are by far the most common type of star in our Milky Way Galaxy. This makes exoplanet K2-18b possibly more dangerous than Earth and is likely to be exposed to more harmful radiation.

This Space Scoop is based on a Press Release from University College London and ESA/Hubble.

Planet K2-18b is eight times the mass of Earth! This is why we call it a “Super-Earth”. 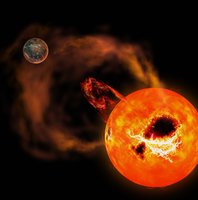