About once or twice every 100 years, a gigantic nuclear bomb detonates in our Galaxy. In just a few short weeks, it blasts out as much energy as our Sun will in its entire lifetime! This powerful explosion is called a 'supernova', and it is the result of a star dramatically ending its life.

The most recent supernova in our galaxy, the Milky Way, happened just over 100 years ago. But, unfortunately for our great-great-great grandparents, the explosion was hidden behind thick clouds of gas and cosmic dust, far away from the Earth. So they couldn’t witness this very rare sight. Because of this cosmic dust, it wasn't until 2008 that a group of astronomers finally stumbled upon the remains of the obliterated star, which you can see in this photograph.

Normally, when a supernova like this happens, the star's material is blown out evenly in all directions. This leaves behind a cloud that is more or less neat and symmetrical, but the object in this picture doesn't follow a neat pattern. Most of the star's material was blasted towards the top of the picture, and it's still travelling in that direction extremely fast. From these clues, astronomers have deduced that this must have been an unusually energetic and messy supernova explosion!

As far as we know, the last supernova in the Milky Way was over 100 years ago. If they happen on average every 100 years or so, another one should be due really soon. Keep your eyes on the skies and you might be the one to spot it first!

There was a famous supernova at the end of the twentieth century called SN1987a. This explosion happened in a nearby galaxy and was so powerful that it was visible for four whole months! 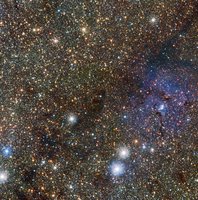