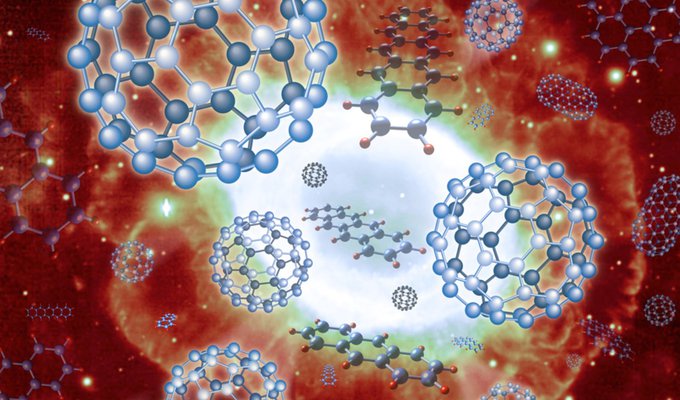 Matter makes up everything you can see: the stars, the Earth, even you!

Matter itself is made up of lots and lots of different kinds of teeny tiny particles, all stuck together. Some of these particles are called atoms. These come in many shapes and sizes — there's hydrogen, helium, and, one of the most important atoms, carbon.

Carbon is the second most common material in the human body (after oxygen). To give you an idea of just how small an atom is: it would take a million atoms lined up to equal the thickness of a sheet of paper!

This weird-looking picture shows a number of molecules (Moll-eh-kyools), which are groups of two or more atoms stuck together. Molecules are so small that nobody can see them, except with extremely powerful microscopes.

The football shaped molecules in this picture are made up of 60 carbon atoms, hence its name “C60”. Carbon is a very important chemical for all life on Earth. Is a big part of the world we live in, from the carbon dioxide in the air to the plants we eat. And almost one-fifth of our body is made up of carbon!

But where does this magic element come from? Well, it comes from stars! All of the carbon in the universe was made inside stars.

After a star has changed all of the hydrogen atoms at its core into helium, it begins to convert the helium atoms into carbon and other atoms (like oxygen). When the stars die, these newly forged chemicals are cast out into space to be recycled as new stars, planets or even people.

However, C60 appears to be very rare in space. This is very peculiar as carbon is the fourth most common chemical in the entire Universe (after hydrogen, helium and oxygen). Additionally, C60 has proven very easy to create in labs on Earth.

Finally, after many observations, the mystery has been solved this week: this particular carbon molecule only forms in parts of the cosmos that are very rich in carbon and where the strong winds coming from a nearby energetic star can mould it into being.

Carbon is essential for life on Earth — it is found in all living organisms. So it's strange that too much carbon in our atmosphere is dangerous to us — today it is a huge cause of global warming! Tonnes of carbon dioxide being released into the atmosphere come from burning fossil fuels such as coal, oil and gas. This is changing our climate in a dramatic way. So do your part and make sure you aren't wasting any energy: turn your electronic devices off when they're not in use, recycle and ride your bike to school!