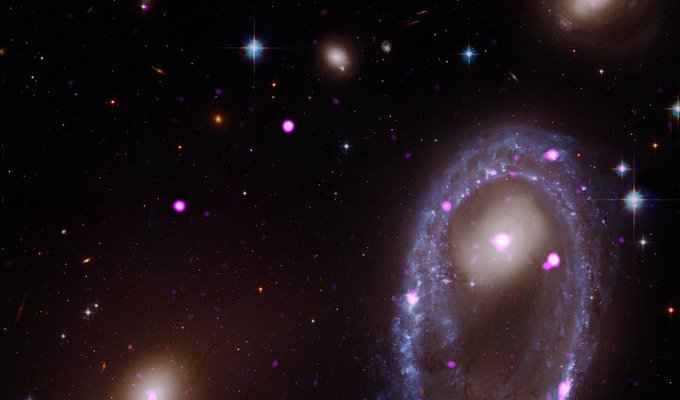 Space holds plenty of dangers, from pitch-black asteroid fields where giant rocks whizz around at 50,000 kilometres per hour to exploding stars more energetic than a billion nuclear bombs. But one of the most dangerous things in space are black holes.

These invisible monsters lurk in space waiting to gobble up anything that gets too close— literally anything. They’ll eat rocks, stars, even light! This makes the discovery of a giant ring of black holes pretty scary.

The galaxy hiding this dark secret can be seen on the right-side of this photograph of space. The black holes are hidden within the bright blue and pink band around the galaxy.

While it doesn’t have the power to rule over mankind, this ring of black holes covers an area of space three times larger than the Milky Way, making it the real lord of the rings!

The ring was formed when one galaxy crashed into another. The violent collision sent a shockwave rippling through the galaxy, pushing material outwards and creating this expanding ring of cosmic gas. It also triggered the birth of new stars, some of which later turned into black holes.

But black holes suck in light, making them invisible to us. So how did we find them?

Each pink blob in this photograph shows an area that’s shooting out bright X-rays. While we can’t see the X-rays with our eyes, we’ve designed telescopes that can take photographs of them for us.

The super bright X-rays in this picture are coming from black holes (or super-dense neutron stars) that are busy sucking material off a companion star.

As the material falls towards a black hole it forms a spinning disk like water circling a drain. The disk becomes super hot and shoots out lots of X-rays.

But don’t worry, this galaxy and its black holes are about 300 million light years away. Not only are the black holes not a threat to us, this discovery can actually help us learn what happens when galaxies collide!

The large pink blob inside this ring galaxy is a “supermassive black hole”. While the black holes within the ring are at most times bigger than our Sun, this one is millions of times more massive!