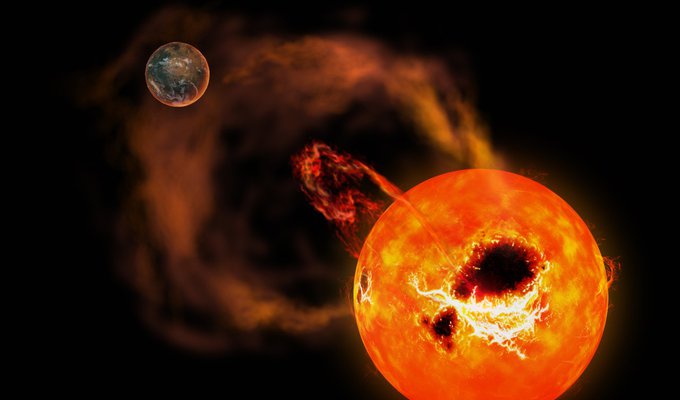 Have you ever heard of solar flares? A solar flare is a giant and sudden explosion on the surface of a star, blowing billions of particles into space. A new telescope in Okayama, Japan observed a superflare on a star in the constellation Leo (the Lion) to better understand how superflares on our Sun can affect technology and life on Earth.

A Danger for Earth

When a flare event happens on the Sun, some of these charged particles arrive at Earth. They can produce beautiful auroras (also known as the northern or southern lights). But, the particles can also disturb radio communications or damage electrical power stations and satellites. On rare occasions, an extremely large “superflare” will occur, which could cause even greater damage to Earth.

This is why astronomers are keeping watch while studying superflare events on other stars. They want to better understand these charged particles and how they might be of danger to us if a superflare event were to happen on our Sun.

Because superflares are rare events, it is difficult to gather enough data and insights while watching our Sun and waiting for a superflare event to happen. Instead, researchers look for exo-planets that are similar to Earth in size and closeness to their stars. They then study the stars that these planets orbit very closely to watch for superflare events.

The Seimei Telescope in Japan observed and studied not one, but 12 superflare events on a red dwarf star 16 light-years away from us. This red dwarf is more likely to host these explosions on their surface - which made it the perfect target for research.

By studying these 12 superflare events, the astronomers have learned more about the activity of the atoms of these solar particles and their bursts of energy. By continuing to watch and study these events, they hope to one day be able to better predict when superflares could happen and to possibly prevent damage here on Earth. For now, astronomers will keep watching these brilliant explosions in hopes of learning more.

A typical solar flare on our Sun is tens of times the size of the Earth. One of the superflares studied by the astronomers on this red dwarf was 20 times larger than the typical flares that are created by our own Sun!