Astronomers have found an amazing star: a superstar that is 150 times heavier than the Sun and an incredible 3 million times brighter! The star is found in a huge cloud of gas and dust called the Tarantula Nebula, shown here in this stunning new image.

When astronomers first found this star, they didn’t realise how special it is, as much of its light is blocked by dust before it reaches Earth. Its superstar identity was being hidden!

However, a team of astronomers have used a powerful telescope on Earth called the Very Large Telescope to study the star in more detail. They discovered that the star is actually one of the brightest in the Universe!

Other superstars have been observed before, lying in the centres of crowded groups of stars, which are called star clusters. But this new superstar is the first to be found living alone in space, with no other stars nearby. It is possible that the superstar used to live amongst other stars, before it was kicked out of the group.

Whether it has always been a loner, or if it used to be part of a star cluster, such a solitary superstar is a “really fascinating object”, says astronomer Jorick Vink, who works at Armagh Observatory in the United Kingdom and is part of the team behind the new discovery. 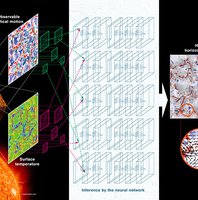