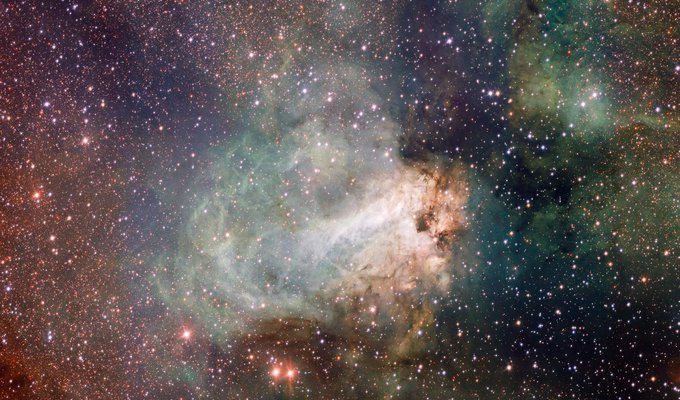 Professional astronomers have powerful telescopes that can take amazing pictures of the Universe. But to get the most out of the telescopes, they have to think carefully about where they put them on Earth.

The best places to use telescopes have clear skies without any clouds. They are also far away from cities, as the glow of streetlights makes it harder to see the night sky – astronomers call this ‘light pollution’. That’s why you see more stars when you head away from cities and go to the countryside, because there is less light pollution.

A desert is a remote place that has very few clouds in the sky, so it is the perfect location for astronomers to observe the Universe. In a desert called the Atacama, which is found in a country called Chile in South America, there is already a big family of telescopes. And now this family has a new member: a new 3-metre-wide telescope called the VST.

Each telescope in the family has a different task. The VST was built to take panoramic pictures of the Universe, so it can photograph big areas of the night sky quickly. For example, the photo shown above of a massive cloud of gas and dust in space, which is called the Swan Nebula, has been captured in a single picture!

Astronomers still have lots of questions about how the Universe works, so there are plans to build many more telescopes around the world.

There is a telescope in Antarctica at the South Pole! Antarctica is a cold desert and it is the driest place on Earth, with some parts of it not having rainfall for more than two million years!

Growth of the Coma Colossus