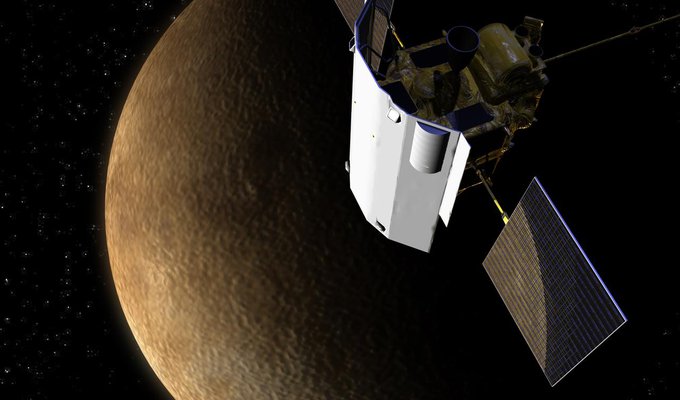 The spacecraft MESSENGER had a long and tricky journey to Mercury, the closest planet to the Sun. But astronomers working on the MESSENGER mission announced today many new discoveries that show the journey was well worth the effort.

The MESSENGER spacecraft couldn’t head directly to Mercury, because travelling to this planet means going towards the Sun. This was a problem for MESSENGER, as the pull of the Sun’s gravity would have accelerated the spacecraft and made it travel too quickly to be able to enter orbit around Mercury – it would have just flown past it! To get around this problem, MESSENGER had to take a scenic route and cleverly use the gravity of other planets to slow itself down on the way.

Because of this, MESSENGER’s journey to Mercury took more than six years! It eventually entered into orbit around Mercury about six months ago. Today, astronomers working on the mission were ready to start sharing what they have learned so far – and there have been a few surprises!

For example, astronomers had expected there to be lots of the metal iron on the surface of Mercury. To check if this is correct, the MESSENGER spacecraft has been studying how light bounces off the planet’s surface using special cameras, as different types of rocks and metals reflect light in different ways. But, to everyone’s surprise, its observations have shown that there is little iron on Mercury’s surface. This finding means that astronomers will have to re-think how the planet formed.

This is one of many discoveries made by MESSENGER that were announced today at an astronomy meeting held in France, where about 1,400 astronomers from around the world have gathered to share their latest research about planets. Check out our other news stories from the meeting at the bottom of this page.

MESSENGER is the first spacecraft to orbit the planet Mercury. But another spacecraft, called Mariner 10, flew by the planet in 1975.

A Big Discovery on a Little Space Rock

Could Aliens Be Closer Than We Thought?