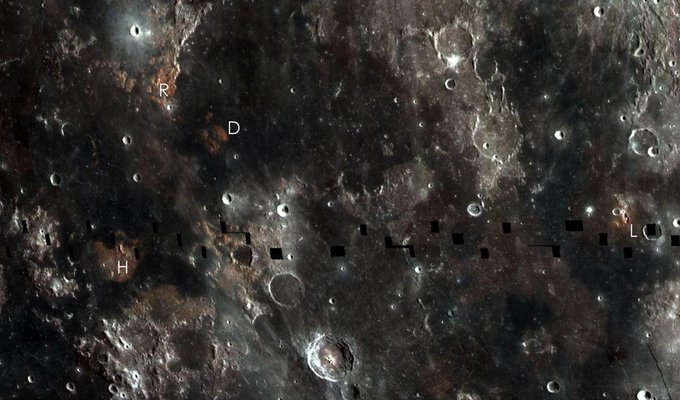 Our eyes can’t see these very faint colours on the Moon’s surface, but astronomers have some clever photography techniques to capture them. Now, a spacecraft that is in orbit around the Moon, called the Lunar Reconnaissance Orbiter, has photographed the entire surface in colour. One of these new colour images is shown above.

The different colours tell astronomers what chemicals are found in different regions of the Moon, which is important for future exploration. When astronauts return to the Moon, these images will help scientists decide where to land for the most interesting experiments. Knowing the chemistry of the surface is also important if plans for a future Moon base get the go-ahead. In order to live and work there, astronauts will have to use the natural resources that are locked away in Moon rocks, such as oxygen.

Coincidentally, tomorrow night is International Observe the Moon Night, where people from all around the world celebrate the Earth’s companion. To celebrate the occasion, we’re asking you to use the photograph shown above as inspiration for your own colour painting of the Moon. We would love to see all of your wonderful paintings, so please email them to info@unawe.org or upload them to our Facebook page (www.facebook.com/unawe).

The colour images of the Moon were announced today at an astronomy meeting held in France, where about 1,400 astronomers from around the world have gathered to share their latest research about planets. Check out our other news stories from the meeting at the bottom of this page.

Strange but true: The Moon rotates, but the same side of the Moon always faces the Earth! This is because it takes the same amount of time for the Moon to make one rotation as it does to travel once around its orbit of the Earth.

When is a Comet not a Comet?