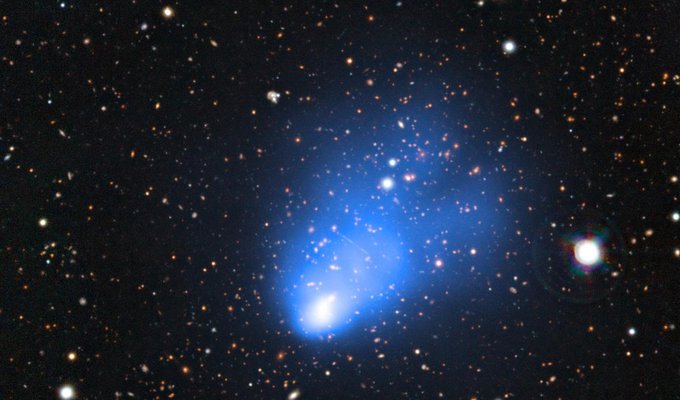 What do you get when you smash two of the largest objects in the Universe together? A big fat one!

This is no joke; that’s exactly what has happened here. Two collections of galaxies, which are called ‘galaxy clusters’, collided. The resulting galaxy cluster that formed from the collision is called El Gordo, which means “fat one” in Spanish!

This new space photo above shows El Gordo. A galaxy cluster like this, with El Gordo's huge size and found so far away in the Universe, is a very rare space object. "This cluster is the most massive, the hottest, and gives off the most X-rays of any cluster found so far at this distance or beyond," says astronomer Felipe Menanteau.

To measure El Gordo’s distance from Earth, astronomers used a telescope called the Very Large Telescope, which is based in the country Chile in South America. They found that it is incredibly far away: Its distance in kilometres is 66 followed by 21 zeros!

Meanwhile, a telescope in space called the Chandra X-ray Observatory was used to find out more about the galaxy cluster by studying its hot gas.

This exciting new discovery was announced today at an important astronomy meeting in Texas in the USA. Astronomers from around the world have gathered there to share their latest findings with each other.

Galaxy clusters are huge and can contain thousands of galaxies!