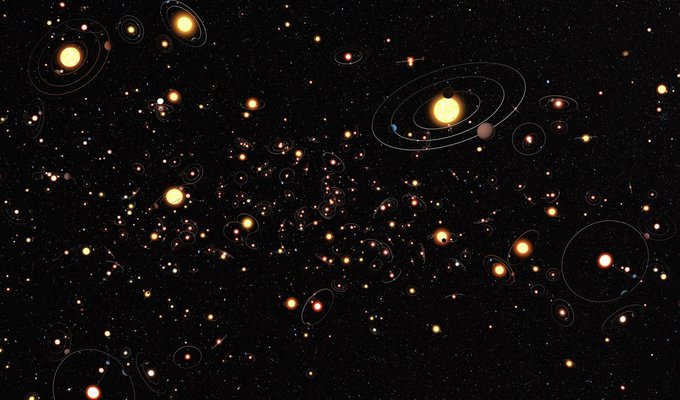 Over the past 16 years, astronomers have found more than 700 planets outside of our Solar System. We call these distant worlds ‘exo-planets’.

Astronomers have different ways that they can search for exo-planets. For example, they can observe how a star dims when a planet passes in front of it. Another method is to look at how a star wobbles because of the pull of a planet’s gravity. (Click here for more information on this.)

However, both of these methods are only good for detecting planets that are bigger than the planet Jupiter, or those that are close to their stars, like how Mercury orbits close to our Sun. But what about the rest?

Over the past six years, astronomers have been using telescopes in Chile, Australia and South Africa to search for exo-planets using a totally different method. This new method can detect planets both big and small, and those that lie much further from their stars too.

In this new method, astronomers use stars like magnifying glasses! It sounds bizarre, but the pull of a star’s gravity is strong enough to bend the beam of light from a more distant star as it travels past it. Because of this, when we view the distant star from Earth, it looks like it has been magnified. And astronomers can tell if the star that is acting like a magnifying glass has a planet in orbit around it, as the power of the magnification is even greater!

Einstein first predicted the idea of cosmic magnifying glasses in 1915, but it took about 90 years for astronomers to use this tool to find exo-planets!

How Long Do Stars Last?