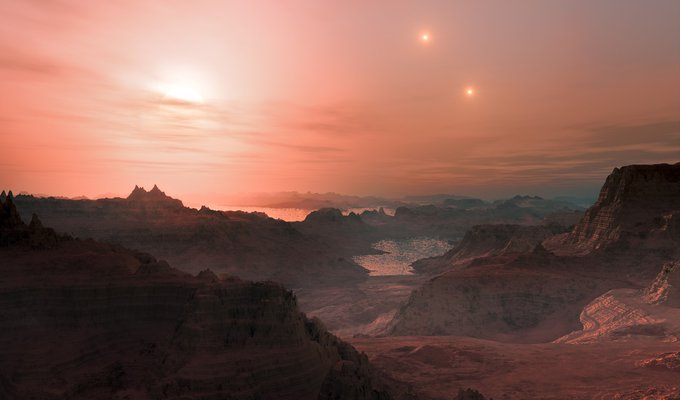 When you look up at the night sky, all of the stars look the same. However, they actually come in different sizes and colours. The colour of the star depends on the temperature of the surface of the star. Despite what you may think, blue stars are much hotter than red stars! In fact, red stars are the coldest! The smallest red stars, which are called ‘red dwarfs’, are by far the most common type of star in our Milky Way Galaxy.

Recently, using a big telescope, a team of astronomers has found that rocky planets that are not much bigger than Earth are very common around red dwarfs. Planets that are just a little bit bigger than ours are called ‘super-Earths’.

The astronomers estimate that about 4 out of every 10 red dwarf stars in our Milky Way have super-Earths in orbit around them that are at the right distance from their stars to make it possible for liquid water to exist on the planets. (Too close to the star and the water would boil away, but it would freeze solid if the planet were too far from the heat of its star.)

Since there are about 160 billion red dwarf stars in the Milky Way, this means that there may be tens of billions of worlds in our Galaxy that are not much bigger than the Earth and have oceans. This is an exciting discovery, as such planets could have alien life living on them!

Our Sun is about 100 times wider than the Earth, but it is still a dwarf compared to other stars – a yellow dwarf, to be precise.

Galaxies Spin Faster as They Get Older