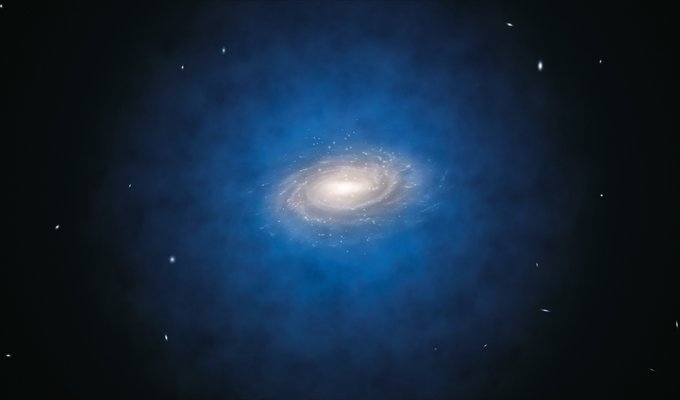 This weird material is called ‘dark matter’, and it’s tricky to find because it is invisible! Although dark matter is invisible, astronomers can still work out where it is in space from the effect that its gravity has on the things around it.

Astronomers think that there is four times as much dark matter in the Universe as the normal material that we can see. That’s because the outer parts of galaxies, including our own Milky Way, rotate very quickly. And without the extra mass provided by the dark matter, there wouldn’t be enough gravity to stop the stars from being flung out of the galaxies at such high speeds.

But where is this dark matter found? The picture above shows where astronomers had expected to find dark matter (coloured blue) in and around our Galaxy. This distribution would mean that there is lots of dark matter in the region around our Sun.

However, a team of astronomers has now observed the way that 400 stars near the Sun move about. From their movements, they have found no evidence for any dark matter in this region. This finding could be shocking news for astronomers!

Some objects in space are invisible to our eyes, but they can be seen with special telescopes, like X-ray and infrared telescopes. But dark matter is completely invisible and gives off no radiation at all!