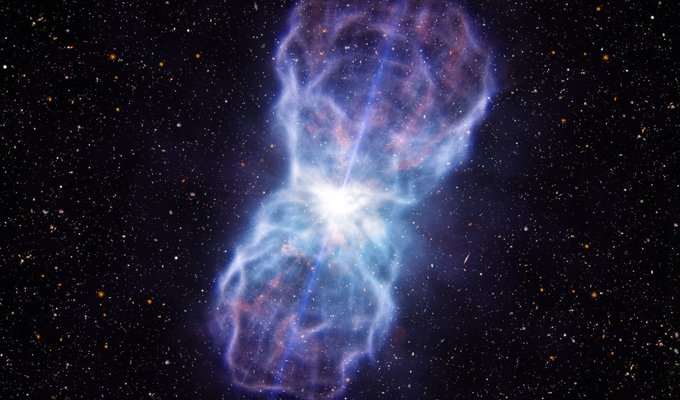 Black holes have a bad reputation; they're known for sucking things in, never to be seen again. A lesser-known fact is that they sometimes create powerful jets that shoot material outwards. Astronomers have just discovered two of these jets and both are record-breakers!

Most galaxies have a black hole at their centre, including our own Galaxy, the Milky Way. These black holes can be millions or billions of times heavier than our Sun, squashed down into a teeny tiny ball. The material is packed down so tightly that it gains an immensely strong gravitational pull — strong enough to swallow even light and keep it from ever escaping!

Black holes are known for pulling material in, and like water being sucked down a plughole, the material forms a disc around the black hole as it feeds. As the disc spins faster and faster, it heats up and blasts out enormous amounts of light and material. These dazzling jets are often found blasting out from of the brightest galaxy centres called 'quasars'.

One of the newly spotted jets is so far away that it lies close to the edge of the known Universe! The other blasts out enough material to make 400 suns every year! And about 100 times more energy than all the stars in the Milky Way galaxy combined — it’s a real monster!

Black holes are not really holes at all, and they're the opposite of empty. Black holes have the most material stuffed into the smallest space of any object in the universe. Make a model of a black hole with this UNAWE activity and find out more about these mysterious monsters! 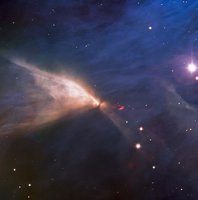