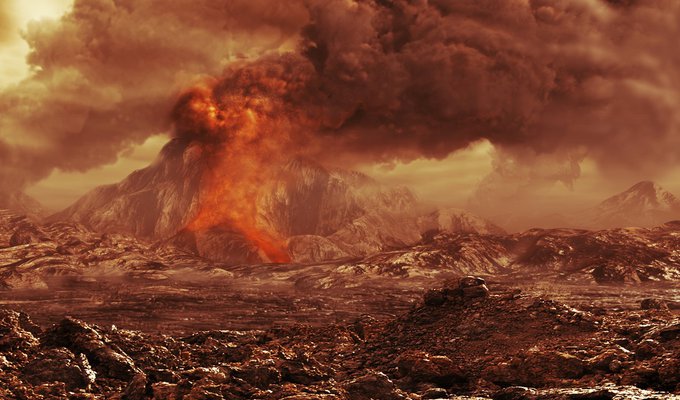 On Earth, glowing spluttering volcanoes are one of the most powerful and fascinating phenomena that nature has to offer. Now, astronomers have found that volcanoes may even be violently erupting on Venus, the planet closest to Earth.

In 2005, they sent a spacecraft called Venus Express to study this alien world from close by. It has been orbiting the planet ever since. Unfortunately, the weather on Venus is always cloudy. The planet is covered with a thick layer of clouds. So the spacecraft can’t directly look for volcanoes on the surface. The astronomers had to use a trick: they searched for a special gas that is released during volcanic outbursts. This gas is sometimes visible above Venus’ thick clouds, so Venus Express can spot it. Using the spacecraft, they saw large changes in the amount of the gas above the clouds. It looks like volcanoes are active on Venus!

Earlier, Venus Express found another clue for volcanic activity. It has a special camera that can peek through the deck of clouds and see temperature differences. With this, the spacecraft got a glimpse of something that looked like hot flowing lava! It seems that our neighbour not only has a rough climate—with heavy storms and hot temperatures—but a violent surface as well.

Venus is one of the brightest objects in the sky. But it’s visible only sometimes and for small periods: just before sunrise (look east) or just after sunset (look west).

Before it is Famous