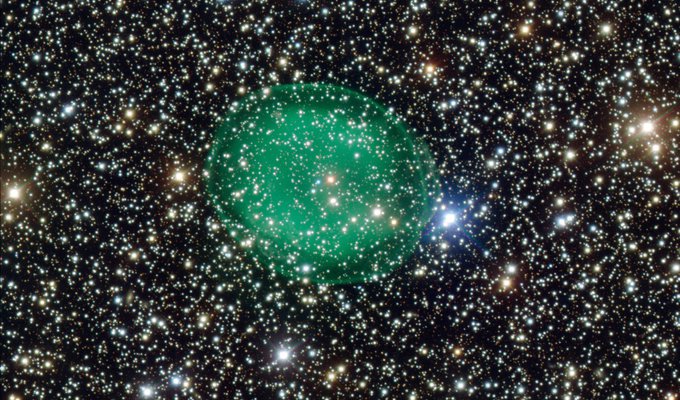 If you're a regular reader of Space Scoop, you've probably seen lots of exciting pictures of space by now. But you'll want to pay special attention to this fuzzy green blob, because this is the future fate of our Sun! (But don't worry, we've got another 5 billion years before this happens!)

The core of a star is a very intense environment. Gravity pushes down from all angles, creating immense pressure, and temperatures can reach over 15 million degrees! In these conditions, ‘nuclear fusion’ can take place. This means that atoms can be fused (merged) together to create different chemicals. For example, four hydrogen atoms create a helium atom.

When a star of a similar size to our Sun has burned all its fuel (hydrogen), it reaches the end of its life. In the very last phase, the star swells up to many times its original size. We call the result a red giant star.

The star has trouble holding on to all its material when it has grown this large, so a large amount of material from the star's outer shell blows off into space. Gas and dust shed by the star form what we call a planetary nebula. This green, glowing sphere is an example of one.

Nuclear fusion has been happening in the core of our own Sun for 4.5 billion years now, and it will continue for another 5 billion years, at least! But eventually, just like the song, there'll be “no sunshine when she's gone”.