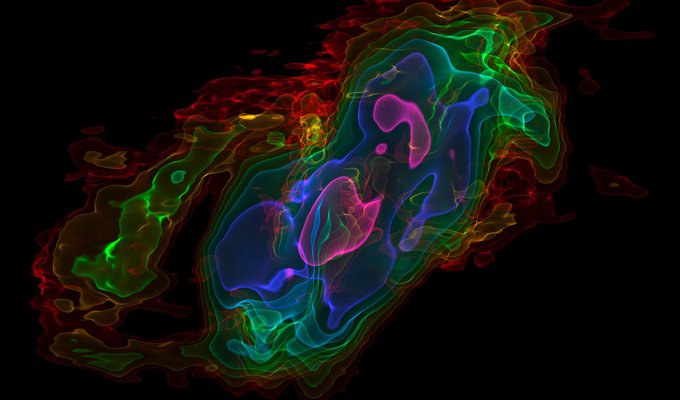 It's not only biologists who study evolution; many astronomers work on this topic, too. But instead of looking at how human beings came into existence, they study the how baby galaxies (known as “proto-galaxies”) grow into giant systems containing hundreds of billions of brilliant stars, similar to our own Galaxy. This colourful picture might look like a piece of modern art, but it is actually made from real telescope observations of a neighbouring galaxy called the Sculptor Galaxy.

The Sculptor Galaxy is one of the closest galaxies to us, and it is going through a busy star-making time, known as a “starburst”. These starbursts don't last very long and this is what astronomers are interested in: what puts a stop to these periods of rapid star formation?

Well, a group of astronomers think they have found the answer. They have discovered huge, billowing columns of cold gas being shot out of the centre of the Sculptor Galaxy into space. The bright multi-coloured blobs in this picture show the cold gas in the galaxy. The pink areas at the centre show where material is flowing outward into space.

Unfortunately for the galaxy, this cold gas is the raw material needed to form new stars! The new discovery shows that the Sculptor Galaxy—and probably all other starburst galaxies—is giving out more material than it is taking it. This finally solves the mystery of why starbursts are so short-lived! Ironically, it is energy from the hot young stars at the galaxy's centre that is propelling the material into the abyss!

In many cases, it is black holes that cause the loss of high amounts of star-making material. And the Sculptor Galaxy does have a supermassive black hole at its centre, one that contains 5 million times more material than our Sun! However this black hole is currently sleeping peacefully and can't be blamed for the galaxies loss of material.

Centaurus A is striking a pose!