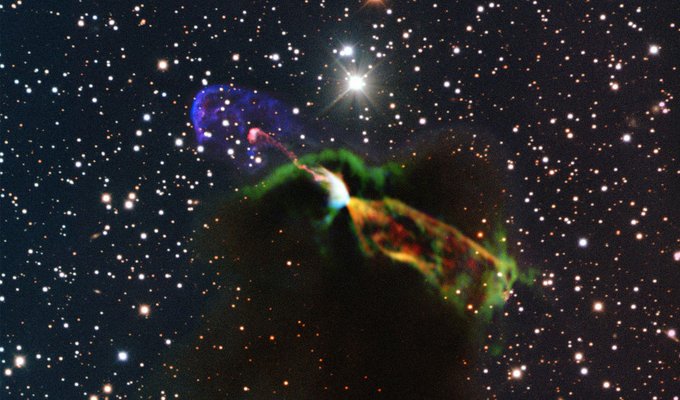 Babies can be annoying, on long-haul flights or in the early hours of the morning, but, in general, they aren't dangerous. The same cannot be said for baby stars.

Young stars are extremely violent. They shoot out material at unbelievable speeds—jets travelling at thousands of kilometres per hour. When these jets crash into the gas and cosmic dust surrounding the young star, they create a bright clump called a Herbig-Haro object, which lives for about a thousand years.

This picture gives us a close-up peek at a Herbig-Haro object; you can see the stunning jets streaming across the sky like a gigantic firework display. I guess stars aren't shy about sending out birth announcements!

The pink and purple jet on the left is flying towards Earth while the other is darting away. The one travelling away from us is nearly invisible in every other picture of this object, hidden from view by clouds of cosmic dust.

This new image from the ALMA telescope finally shows it in fantastic yellow and green detail. This picture also reveals something else: these jets are even more energetic than astronomers expected. In fact, they're zooming through space at over one million kilometres per hour.

If you could travel that fast, you could go from your house to the Moon in less than 20 minutes!

These jets look small, dwarfed by the cold, black cloud around them. But actually, they are hundreds of times the length of our entire Solar System!

Secrets of an Alien World