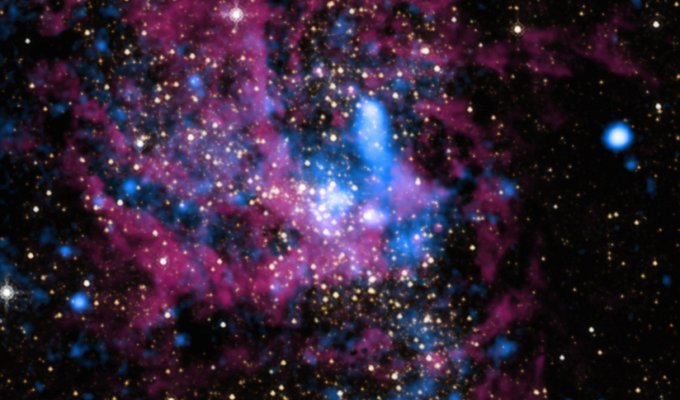 For a long time people believed that the Earth was flat and that if you sailed too far you'd fall over the edge! It seems funny they could have thought that, because now we're lucky enough to have pictures of our entire planet and we can see its shape (take a look at image 2). But it took some pretty impressive technology to get these pictures, which wasn't available to our ancient ancestors. Did you know you have to travel about 20,000 kilometres from Earth to be able to see the entire planet?

Now imagine how far into space you'd have to travel to fit all the 300 billion stars of the Milky Way (our Galaxy) into one shot! This is way beyond our abilities at the moment, but we can photograph small sections of the Galaxy. This picture from the Chandra X-ray Observatory shows the very centre of the Milky Way. This is the most chaotic and dangerous part of the Galaxy, and home to a supermassive black hole.

Anything that gets too close to a black hole is pulled into it with such a strong force that it has no chance of escape. The boundary that marks the point of no return is called the event horizon. Past this not even light will return: this monster will pull it in forever. The blue haze in this picture includes piping-hot gas floating perilously close to the event horizon of our Galaxy's supermassive black hole. But astronomers have found that just a tiny amount of this gas will be gobbled up by the black hole, and the rest will be “spat out” before it gets too close.

Image 2 shows a picture of the Earth as a whole planet from space. It was taken by astronauts during the Apollo 8 mission in 1968. This was the first manned spacecraft to reach the Moon, which they orbited around before returning safely to Earth. The crew were the first people to ever see this view of Earth!

The Big Bad Wolves That'll Blow You Away!