The Disappearance of the Cosmic Spinning Tops
Jan. 9, 2015 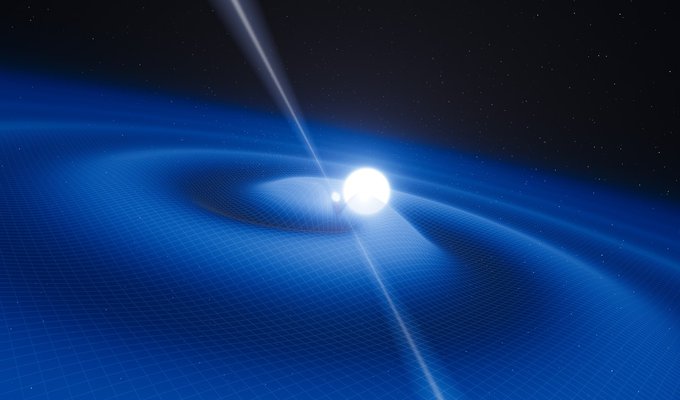 The Universe can be thought of as a sheet of fabric. The natural, relaxed state, of this sheet is perfectly flat. However, it can be stretched and squeezed by objects, like planets and stars. The more massive the object the more it makes dents in the fabric (which we call ‘spacetime’).

In this picture we can see two stars circling around each other, containing a white dwarf (the larger star) and a pulsar (the smaller star). Although we cannot see it, an artist has tried to demonstrate how the fabric of spacetime scrunches around the stars.

Pulsars are extremely compact stars that spin hundreds of times a second and shoot out radio waves. Like a lighthouse, these beams can shine towards us on Earth in pulses.

Each of these two stars are more massive than the Sun, but they are over 100 times closer together than the Earth is to the Sun. They orbit each other once every four hours! Because they are so close, their combined gravity causes many remarkable effects.

When you start a spinning top, it doesn’t just rotate it also wobbles. In the same way, pulsars begin to wobble when they move through a ripple in spacetime caused by strong gravity.

By measuring the wobble of this pulsar (called J1906 for short), scientists can work out how much spacetime has been warped around the two objects. From this, they can calculate out how massive the stars are.

This is quite an impressive feat, because weighing stars while they freely float through space is exceedingly difficult – imagine trying to weigh a cloud!

Scientists were quite lucky with their research on this pulsar, because not long after they had collected their data, it disappeared! The star has wobbled so much that the pulsar jets no longer point towards Earth. But don’t worry, they will wobble back towards us within the next 160 years.

Looking into a famous black hole and its neighbourhood