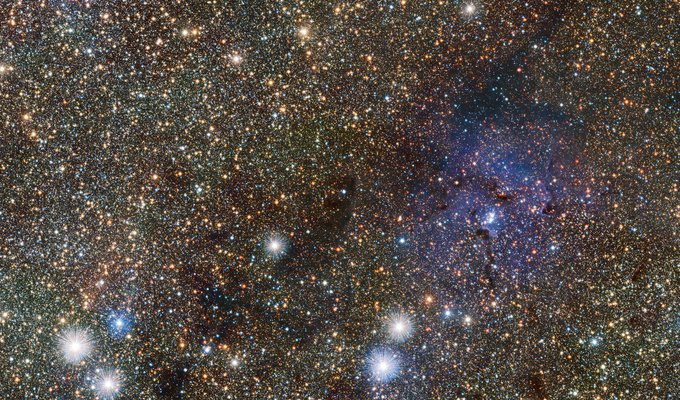 The picture was captured using a special telescope called VISTA. VISTA is special because it doesn’t collect normal light that our eyes can see. It looks at the Universe in light that we can’t see, called Infrared.

Unlike the visible light we see with our eyes, infrared light can travel through materials like cosmic dust and show us what is hiding within.

Like all telescopes, VISTA is used for more than just taking pretty pictures of space (that’s just a bonus!) One of its major tasks is to peer into thick dust clouds in the centre of our Galaxy that usually absorb visible light.

Rather than the view being blocked, VISTA can see far beyond and detect objects on the other side of the galaxy that have never been seen before.

By chance this picture shows a perfect example of the surprises that can be revealed when looking at the Universe using Infrared.

In just the small section of the cosmos captured in this photograph, VISTA has discovered two new stars! They are two special types of star known as Cepheid (SEA-fee-id) variables. Theses are huge, bright yellow stars, thousands of times brighter than the Sun.

But, more interesting, these stars are famous for the way they slowly brighten and then fade again over time. The brightness can change over days or months, depending on the star — the brightness of the two newly discovered stars varies every eleven days.

Cepheid variable stars are very important to astronomers because they can help us calculate the distance to far away galaxies.