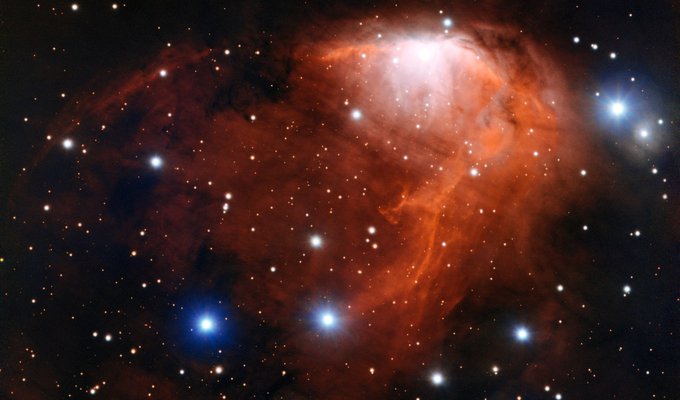 Space is almost as cold as it gets. So it’s funny that the object in this new space photograph looks so much like a flame, from the white-hot centre, to the rising red clouds. The big blue stars even look like sparks!

This object is a nebula (a cloud of cosmic gas and dust) and on top of looking like a flame, it also acts like one. (Apart from the blue stars, which actually lie in front of the nebula, much closer to Earth.)

Like the scorching core of a flame, the hottest part of this nebula is the bright region at the centre where a crowd of massive young stars are hiding. Although they cannot be seen in this picture, these stars are having a dramatic effect on the surrounding regions.

The gas in the centre of the nebula is being heated dramatically by the young stars. As the gas warms up it expands through the surrounding cooler red gas, like the steam rising from a kettle as it boils.

Once the hot gas reaches the edge of the gas cloud, it bursts outwards into the cold blackness of space. Because you get a similar effect when opening a bottle of fizzy champagne, this process is known as ‘champagne flow’.

And this nebula has more to offer than a few bubbles. There appears to have been many episodes of star birth within this cloud. This means there’s a mix of stars of all ages and at many different stages of their lives. This makes the nebula very interesting to astronomers who are studying how stars are born and grow.

This cosmic cloud has extremely high ‘extinction’. This doesn’t mean that many species die here. In astronomy ‘extinction’ means light from an object is blocked by cosmic dust and can’t reach our eyes or telescopes on Earth.