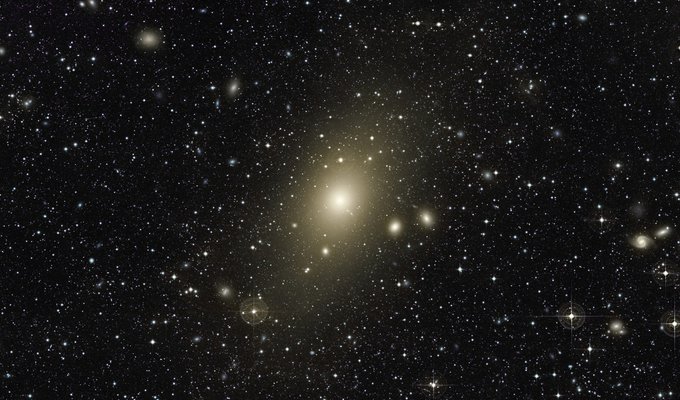 Galaxies are collections of hundreds of billions of stars. But did you know that some galaxies grow even bigger by gobbling up smaller galaxies?!

Astronomers have believed this for a while, but it’s been very difficult to prove. Once a galaxy has been eaten, it’s almost impossible to find any evidence that it ever existed. It’s like looking for water thrown from a bucket into a pond. The water very quickly becomes part of the pond leaving no trace.

In the same way, stars from the smaller galaxy slot into the larger galaxy and it becomes almost impossible to tell which stars belonged to which galaxy originally.

But astronomers have now come up with a very clever way to spot a galaxy that has been eaten. They look at clouds of cosmic gas and dust called planetary nebulae. Planetary nebulae are less common than stars and can be spotted more easily than individual stars.

Now, imagine throwing a bucket of water into a pond again. But this time the water is muddy. When the water joins the pond, we can still see floating pieces of mud moving along the ripples on the surface.

The planetary nebulae act like the mud particles and show us the ripples of the small galaxy moving through the bigger galaxy.

This technique has been used on a famous supergiant galaxy called Messier 87. Astronomers looked at 300 planetary nebulae inside this galaxy and found that it has a dark secret. It has swallowed an entire spiral galaxy at some point over the last billion years!

Trying to spot one planetary nebula in Messier 87 is the same as trying to spot to normal 60-watt light bulbs on Venus from here on Earth!

Piecing Together Life on Earth 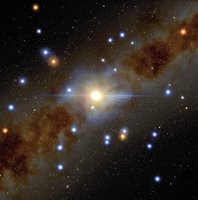 Looking deeper into the gigantic dark heart of our Milky Way