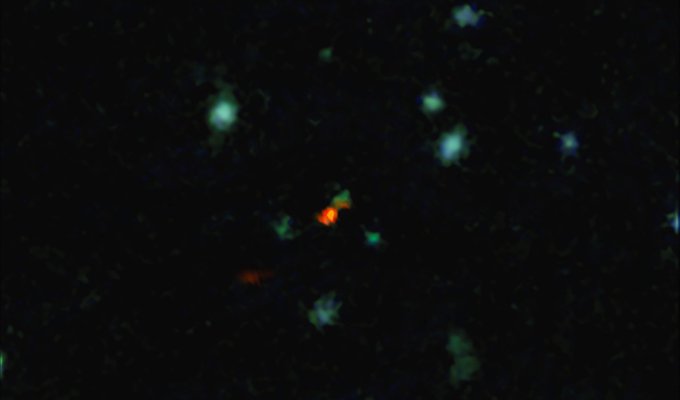 Have you ever woken up before sunrise and seen that it was very foggy outside, but then the Sun came up and quickly burned the fog away? Well, something similar happened in the Universe when it was very young.

Back when the first stars and galaxies formed, the Universe was filled with a thick fog of hydrogen gas. However, the Universe’s first galaxies were full of huge stars that gave off very strong Ultra Violet or UV light. (UV light is the type of sunlight that causes sunburn.) This strong UV light eventually cleared the fog, just like the morning Sun.

That is something we already know about the early Universe. What we know little about, are the first galaxies. Up to now our telescopes have only been able to see them as very faint blobs, as shown in the picture above. But now the powerful vision of the ALMA telescope is starting to change this.

ALMA’s powerful eyes can photograph the galaxies with much more detail than we’ve seen before. The orange shape at the centre of this picture is a cloud of cosmic gas from when the Universe was much younger, caught in the middle of becoming one of the first galaxies in the Universe!

Observations like this will help astronomers to investigate how the first galaxies were formed. (To learn how astronomers can see into the past, click here.)

The fuzzy blobs in this picture are objects that existed over 13 billion years ago!