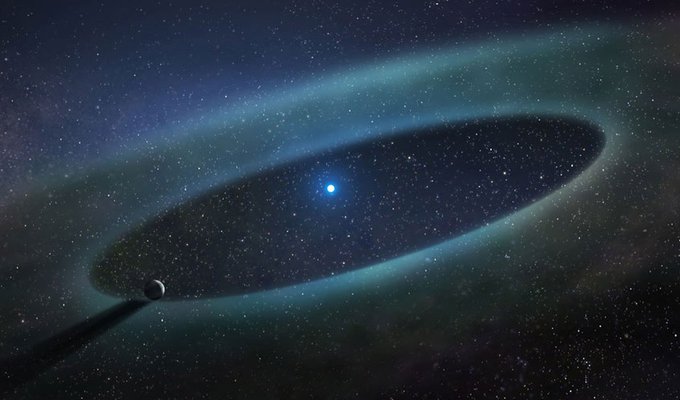 Have you ever woken up before dawn on a cold, foggy morning? The fog normally disappears shortly after sunrise, as heat and light from the Sun burns it away. If our Sun were hotter and brighter, what do you think would happen? It would burn away the fog even quicker.

Newborn stars are often surrounded by disks of gas and dust – a kind of “cosmic fog”. Astronomers expected that, like fog on Earth, these disks would disappear faster around hotter, brighter stars. Surprisingly, this doesn’t seem to be the case.

Astronomers have been studying the disks around a group of 24 young stars. They found large amounts of gas around three of the stars. Strangely enough, these disks surround the bulkiest stars – each one twice as heavy as our Sun.

These stars are also much hotter and brighter than the Sun. The smaller, fainter and cooler stars have dusty disks, but no gas. This is the opposite of what you would expect.

It’s unclear where the gas comes from. It could be that the heavy stars haven’t been able to blow away the gas as well as expected. Or maybe comets are supplying the new gas. We know comets sometimes carry the exact type of gas found in the disks.

Either way, the new mystery might have actually shed light on another unresolved area of space science - the birth of giant gas planets. If the disks around massive stars can contain such enormous amounts of gas for millions of years, there’s more time for gas planets (like Jupiter and Uranus) to form.

On top of the 4 gas giants in our Solar System (Jupiter, Saturn, Uranus, Neptune), over 1,000 have been found orbiting distant stars.

The Sextans B galaxy is a feast to the eyes