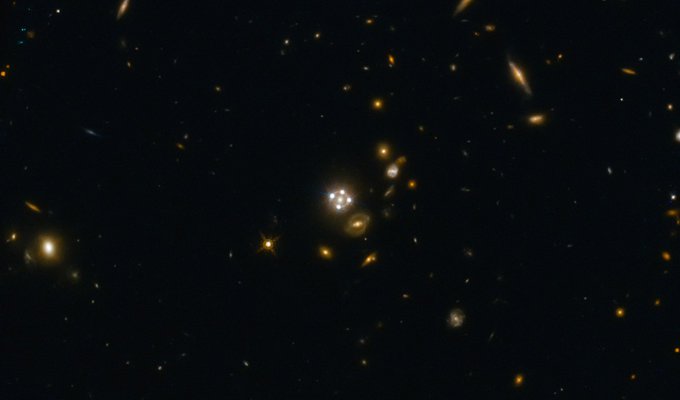 Most scientists believe that about 14 billion years ago the Universe exploded into existence in a Big Bang. Since then, it has evolved into the place we see today — and it’s still growing!

No matter which direction we look in space, distant galaxies appear to be moving away from us. The farther away a galaxy is, the faster it’s moving away. This is called the ‘expansion of the Universe’.

The growth, or expansion, of the Universe can be measured in a number of ways. One technique is to study the ‘afterglow’ of the birth of the Universe. Like smoke drifting away after fireworks, an afterglow from the Big Bang lingers in space.

Another method is to use a natural phenomenon called ‘cosmic lensing’. Cosmic lensing happens when two galaxies are lined-up, one behind the other, as we look at them in the sky. The light from the distant galaxy is bent around the nearer one, because of gravity.

Instead of the distant galaxy being hidden behind the nearer one, we see a ghost image (or ‘lensed image’) of the galaxy. Sometimes we can see many lensed images of the same distant galaxy. You can see this effect at the centre of the picture above.

Scientists have found that new measurements on the growth of the very distant Universe don’t agree with previous measurements. The new study says that the Universe is expanding even faster than expected!

The fact that all galaxies appear to be moving away from us doesn’t mean we’re at the centre of the Universe. A simple way to think of it is to imagine baking a fruit loaf. As the bread rises, all the pieces of fruit move farther apart from one another. No matter where in the loaf they are, every piece of fruit sees all of the others moving away from it!

This Space Scoop is based on Press Releases from Hubble Space Telescope , NAOJ .