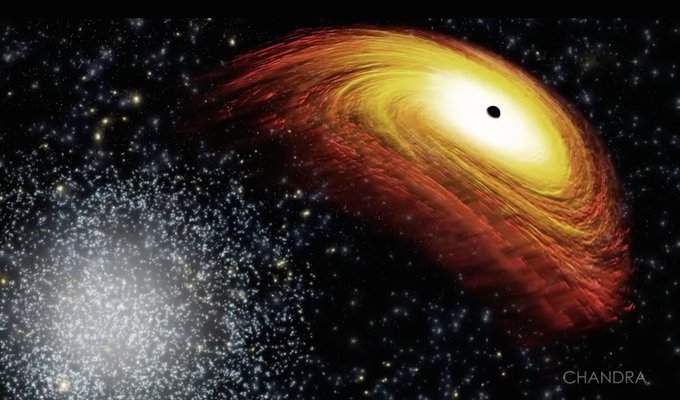 What’s invisible, 160 million times more massive than the Sun, and on the move?

Supermassive black holes are just what their name suggests: really, really massive black holes. They can grow up to billions of times more massive than the Sun, possess immense power and have extreme eating habits. They will devour stars, rocky planets, even light — nothing is off the menu.

Following a trail of clues, astronomers may have figured out what caused this unusual behaviour. The galaxy containing this black hole was involved in a collision with another galaxy, millions of years ago. The two galaxies eventually calmed and merged together to form one enormous galaxy, both bringing with them their own supermassive black hole.

But one galaxy wasn’t big enough for the both black holes. The immense gravity of these objects may have pulled them towards each other, closer and closer, until they eventually crashed and melded into one. This violent collision then sent gravitational waves – warps in space – crashing through the Universe.

This would have given the newly formed black hole such a large kick that pushed it out from the galaxy's centre!

Our Solar System lies 25,000 light years from the core of our Galaxy and the supermassive black hole, Sagittarius A*.

It All Started with a Big Bang... But When?

Do Stars have a Pulse?