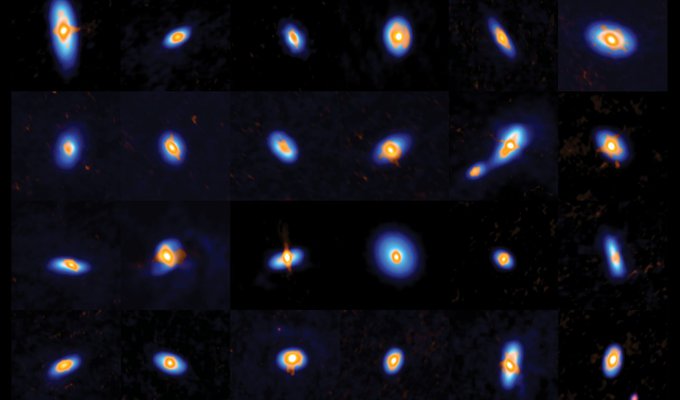 How do the stars and planets appear in the night sky? Where do they come from and what are they made out of? Most of the stars in the universe are accompanied by planets. These planets are born in rings of dust and gas, called ‘protoplanetary disks’. Even very young stars are surrounded by these disks. Astronomers want to know exactly when these disks start to form, and what they look like.

But young stars are very faint, and there are dense clouds of dust and gas surrounding them in stellar nurseries. Only highly sensitive radio telescopes can spot the tiny disks around these baby stars amidst the densely packed material in these clouds.

An international team of astronomers used two of the most powerful radio telescopes in the world to create more than three hundred images of planet-forming disks around very young stars in the Orion Clouds. These images have revealed new details about the birthplaces of planets and the earliest stages of star formation.

In the earliest part of its life, a star is called a ‘protostar’. The star is simply a ball of cold gas and dust that is collapsing under the force of gravity. It doesn’t even have a nuclear fire in its heart, which powers older stars. With time, the cloud collapses and it begins to spin – forming a flattened disk around the protostar. Material from the disk continues to feed the star and make it grow. As it continues to collapse, the protostar squashes into a tighter, hotter ball. Eventually, the left-over material in the disk is expected to form planets.

Protostars go from a freezing -250 °C to anywhere up to 40,000 °C (on their surface) when they become fully fledged stars.