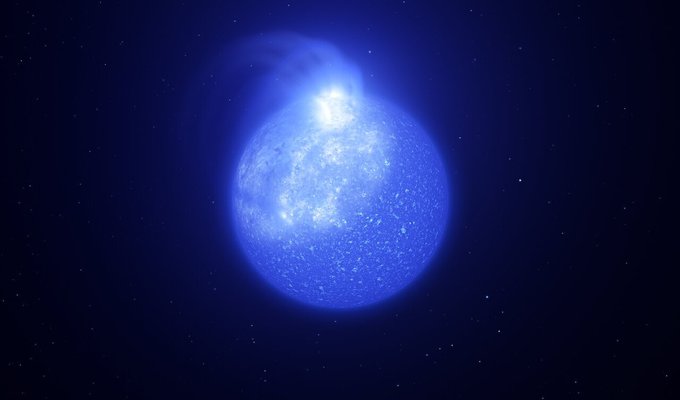 Just like on Earth, stars can experience extreme weather and activity too! But some extreme activity on other bodies in the Universe is so treacherous that it’s hard to imagine. Astronomers using telescopes of the European Southern Observatory have found some peculiar activity in a cluster of small, bright stars.

A Special Type of Star

These astronomers set out to study a special type of star called “extreme horizontal branch stars”. These stars are about half the size of our Sun, but are five times hotter! Because of their small size, these stars are usually hidden in larger clumps of stars, known as star clusters.

The new research suggests that these hot stars are host to two particularly extreme characteristics:

Firstly, it was found that these stars have large magnetic spots! These are areas with heightened magnetic activity. They are also brighter and hotter than the surrounding surface of the star. These spots are very big - covering up to a quarter of the star’s surface. They also differ from the spots found on our Sun, which instead has much smaller darker stains on its surface that are colder than its surroundings.

The spots observed on this special type of star are also incredibly persistent. They last for decades, while individual sunspots like those on our Sun are temporary, lasting only a few days to months. As the hot stars rotate, the large spots on the surface come and go. This causes clear changes in the star’s brightness that can be detected and studied by astronomers.

Not only are these small and bright stars hosts to giant spots, but some of them also experience superflare events. These are explosions of energy that are several million times more energetic than similar eruptions on the Sun.

Unlike the all-too-frequent storms on Earth, stars experience storms of this electrically charged, superheated gas, called plasma. This energy is then sent out into space.

In our Milky Way Galaxy, you can tell how old a star cluster is based on where it’s found. Older clusters are normally found further from the centre of the galaxy than younger clusters.

Roaring Fire of the Night