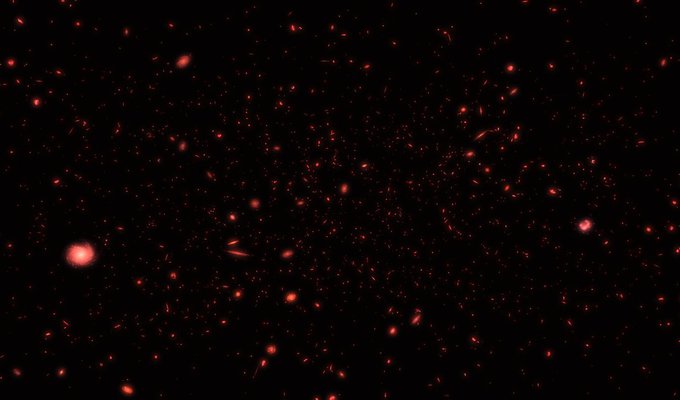 When paleontologists want to study how the earliest forms of life on Earth looked like, they look for fossils in very old rocks. Certain animals and plants are found in certain time periods throughout history. In a similar way, astronomers study galaxies that are very far away to find the earliest stars.

A team of European astronomers set out to learn more about how the Universe appeared in its “early” years. They did so by looking for an ancient and extinct type of star, called “Population III stars”. Astronomers believe that the first stars that were formed in the Universe were of this type, so they set out to search for them in the early Universe. When a Population III star is found in a galaxy, this would be a strong indication that the galaxy is very young. This is much like paleontologists looking for fossils of the first living creatures on Earth!

The scientists looked hard for these stars in the images of the young Universe taken by the Hubble Space Telescope. These images show galaxies at the time when the Universe was around 500 million to 1 billion years old. Although this is a large number, this is still an early stage of the Universe, and the astronomers expected that these galaxies were only just newly formed at this time. But to their surprise, no Population III stars could be found! The stars that are found in the young galaxies are of older generations, but their ancestors are not present anymore. This suggests that the very first stars and galaxies in the Universe were created even earlier than astronomers had thought.

In order to learn more about when the first stars and galaxies in the Universe truly formed, astronomers will be eagerly awaiting to get a better look into the young Universe. The upcoming James Webb Space Telescope will be capable of looking even further into cosmic history.

The upcoming James Webb Space Telescope will be able to study how the Universe appeared around 250 million years after the Big Bang!