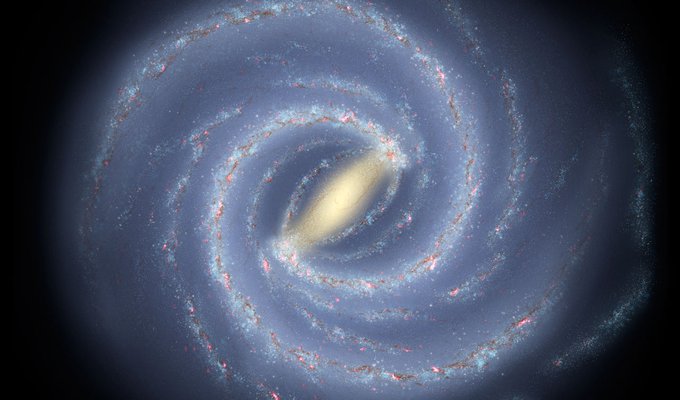 Just like the familiar maps we use to navigate our own neighbourhoods and cities, astronomers develop maps of the Universe too!

Using the power of several telescopes across Japan, astronomers have learned some new insights as to the precise location of the Earth within our Milky Way Galaxy (and the black hole that lies at the center of it!).

Because Earth is located inside the Milky Way galaxy, we can’t step back and see what the galaxy looks like from the outside. Therefore, the measurement of the positions and motions of objects in space is an important tool for understanding the overall structure of the galaxy and our place in it.

The VLBI Exploration of Radio Astrometry (VERA) telescope, operated by the National Astronomical Observatory of Japan, uses a special technique to study the skies known as interferometry. This technique combines the data from radio telescopes that are scattered all across Japan in order to achieve the same results that a giant telescope would. In this case, the combination of telescopes, when working together, create the power of a giant telescope!

From this map created by the VERA telescope, astronomers have calculated the center of the Milky Way galaxy, the point that everything revolves around. The map tells us that the center of the galaxy, and the supermassive black hole that lives there, is located 25 800 light-years from Earth. This is closer than the official value of 27 700 light-years that astronomers have been using since 1985. They also determined that Earth is travelling at a speed of 227 kilometers per second as it orbits around the center of the Milky Way Galaxy. That’s faster than astronomers previously believed and is about two-and-a-half times as fast as a bolt of Lightning!

This also means Earth is little bit faster and about slightly closer to the supermassive black hole in the center of the Milky Way than we previously believed. But don’t worry, this doesn’t mean that our planet is plunging towards the black hole! Instead, these new insights paint a clearer and more accurate map of our Milky Way galaxy.

The VERA telescope hopes to observe and study the motions more objects in our galaxy, particularly ones close to our galaxy's  supermassive black hole. This will help us to better study the structure and motion of the Milky Way.

The VLBA is sharp enough that it could see the details of a United States penny if it were placed on the surface of the Moon.

Why You Couldn't Hide Your Spaceship in a Nebula