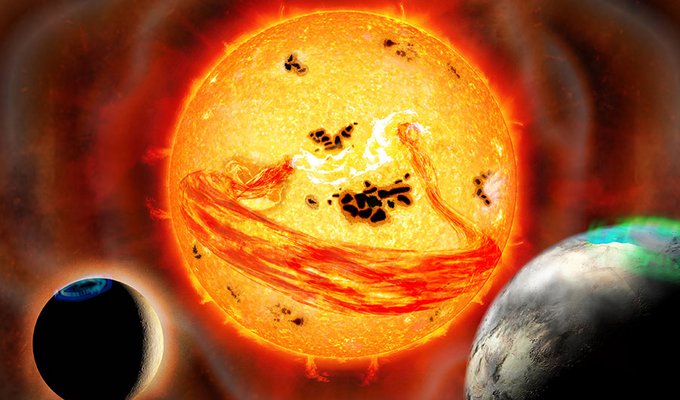 Astronomers have observed for the first time a star like our Sun spewing a massive amount of flaming gas, like a gigantic dragon. EK Draconis, a star that is similar to our Sun in size – but younger – showed us what scientists call a supermassive filament eruption.

This means that our Sun could have coughed a great deal of plasma in its early days too, making the environment of nearby planets like the Earth quite a harsh place. Plasma is a gas so hot that it breaks down into ions and electrons, some of the very tiny parts that make atoms.

The team of astronomers saw that EK Draconis’ stream of plasma was really (really!) large, about ten times more massive than any of the kind we’ve ever seen our Sun belch. Not only is it large, but it is fast too: about 500 kilometers per second – almost 1,500 times faster than the speed of sound!

EK Draconis is 111 light-years away from us in the constellation of Draco – and if it is a typical young Sun-like star, these supermassive eruptions could be common around young stars. And if this is so, these flares could have an impact on the evolution of life on planets nearby. What can it help us find about the way life evolved on our Earth? Science is still to find out more details on that.

This sort of eruption also releases a lot of electromagnetic radiation like radio waves, X-rays, ultraviolet light and visible light. In 1859, our Sun spewed such a strong jet of plasma that the Earth’s atmosphere wasn’t able to hold the electromagnetic storm that came with it. Telegraph systems in the US and Europe failed, and electrical grids all over the world got damaged. The event is named Carrington Event after one of the astronomers that figured the event out, Richard Carrington.

The Recipe For Our Universe