Artificial brain helps “see” plasma moving on the Sun
May 4, 2022 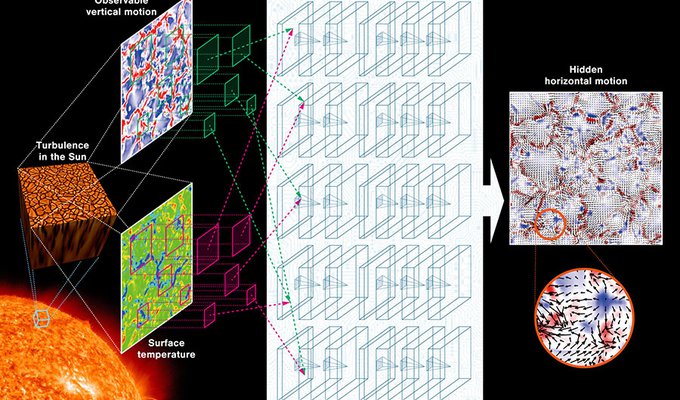 The study of the Sun has many challenges. While it is relatively easy to observe its temperature and the movement of solar plasma boiling up and down on the solar surface, it is quite hard to spot how this same plasma moves from side to side.

Solar plasma is the extremely hot gas that flows up and down on the Sun’s surface. It is so hot that the atoms in it break down into even smaller parts, like electrons and ions!

Scientists at the National Astronomical Observatory of Japan and the National Institute for Fusion Science created a neural network model – a computer programme that works in a way quite similar to our brain – to determine the hidden horizontal movement of solar plasma. They “trained” the artificial brain with data, simulating the plasma movement.

Feeding the model with information on temperature and vertical movement of solar plasma, the programme was able to tell how this plasma would move horizontally, or from side to side. And this was an amazing find.

With this information at hand, scientists will not only be able to better study our Sun but also better understand how fluids move and atoms fuse with each other, for example. Isn’t that amazing?

Image: Given the observable vertical motion and surface temperature, the neural network is able to infer the horizontal motion. Credits: NAOJ.

The Sun is important to the Sustainable Development Goal of Affordable and Clean Energy, both as the source of solar power and as a natural example of fusion energy.

Before it is Famous