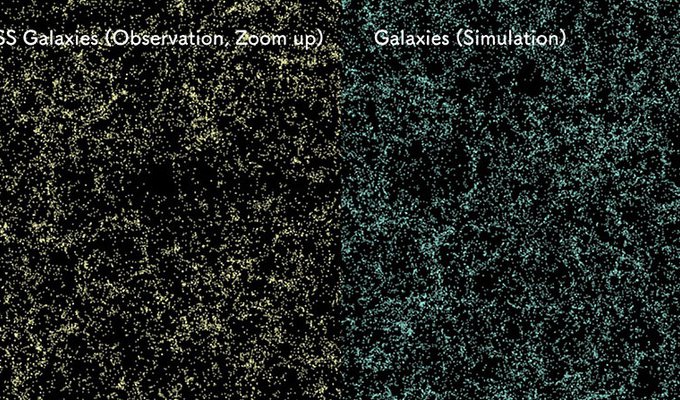 To understand the evolution of the Universe, astronomers use many complex equations. Because there are some things that we do not know for sure yet, scientists have to estimate some of the values in these equations – such values come from different simulations, and the best ones match real-life observations of our Cosmos.

Solving these complicated equations takes a lot of time and money, but it just got a bit easier with the help of a new technique that combines artificial intelligence and astronomy Big Data.

A team of researchers developed an emulator with artificial intelligence that can look at the distribution of galaxies in simulations or real data and guess what elements (or parameters, as astronomers say) led to a certain pattern it sees!

It takes dozens of hours of supercomputer time for a simulation to run. But with this emulator, results can come as fast as one CPU second (​​CPU time is the amount of time that a computer spends actively running a process) on a laptop!

First, the team trained the emulator on simulated data produced by ATERUI II, the world’s most powerful supercomputer dedicated to astronomy, operated by the National Astronomical Observatory of Japan (NAOJ). Then, they ran real data from the Sloan Digital Sky Survey for galaxy distribution dataset.

The results were really good: they confirmed that matter contributes to only 30% of the energy in the Universe, the other 70% being dark energy that makes the Universe expand. The analysis also showed some very accurate results, with a precision that other conventional analysis methods do not normally give.

Combined with data from ongoing and future research, this emulator will be able to tell us even more about the Universe in which we live!

Image: Zoom up of a real portion of the Universe as observed by the Sloan Digital Sky Survey (left) and mock galaxies formed in the simulated dark matter (right). Credits: Takahiro Nishimichi

Why Are Heavy Stars So Gassy?

So You Think You're Sitting Still?