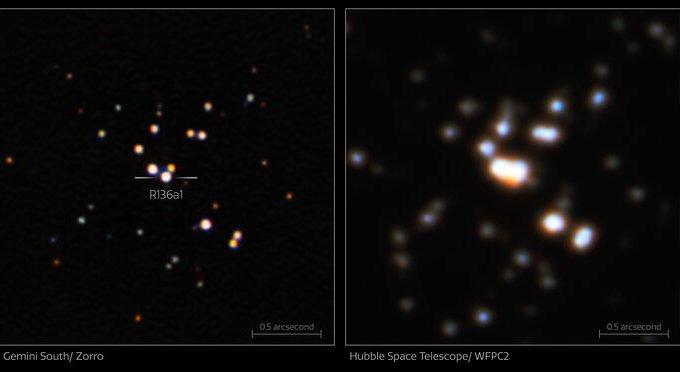 Located in the Tarantula Nebula at about 160,000 light-years from us, R136a1 is the most massive star we know across the whole Universe. Using the Gemini South telescope in Chile, astronomers recently managed to get the sharpest image ever made of the gigantic star. The image suggests that maybe such massive stars might not be that super massive, after all.

Stars such as R136a1 usually have over 100 times the mass of our Sun, and astronomers are trying to better understand how they form. One thing scientists do know about these cosmic giants is that they live fast and die young – they burn their internal fuel in only a few million years. Think that's too slow? Our Sun will burn for about 10 billion years and has not got to even half of its life!

R136a1 lies at the R136 star cluster – and having many stars as a company does not make observation efforts any easier. Previous observations suggested R136a1 had a mass somewhere between 250 to 320 times the mass of the Sun. The new observations indicate these numbers might be a little overestimated: R136a1 is probably 170 to 230 times more massive than the Sun. Even with these new numbers, this is still the most massive star we have ever known!

To make their measurements and observations, a team led by astronomer Venu M. Kalari (NOIRLab) compared R136a1's observed brightness and temperature with predictions they had in theory. With the new observations, it was possible to separate R136a1's brightness from that of its neighbouring stars – and this led to a lower estimate of its brightness, and, as a consequence, its mass.

The result can help us better understand how chemical elements heavier than helium come by in the Universe. Isn't that super interesting?

Gemini South's main instrument that allowed for the discovery is an optical camera named "Zorro", which means "fox" in Spanish.

Health Warning for a Nearby Star

A hidden map of the invisible magnetic Universe