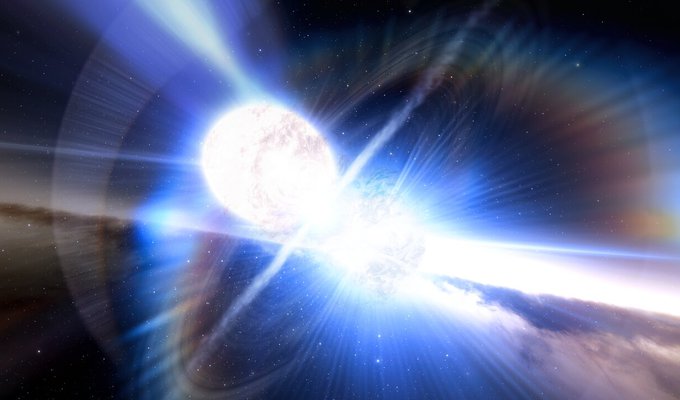 For the first time, astronomers found surprising clues of a ‘kilonova’ – a huge explosion sparked by the clash of neutron stars when studying the “post-credits-scene” of a long gamma-ray burst.

But what makes this kilonova discovery surprising? How did two different teams of astronomers discover the same surprising results? Let’s explore!

Gamma-ray bursts (GRBs) are the most powerful “fireworks” in the Universe. GRBs usually form in a very distant, early universe that it takes more than six billion years for light from these bursts to reach our planet, making it impossible to study them – until now.

In 2021, NASA’s telescopes picked up a burst of powerful flash of gamma rays - named GRB 211211A, unusually close to our planet, only about a billion light-years away. So close that astronomers could now study this newly discovered long GRB in great detail.

Long GRBs mainly occur when a massive star, at least ten times the mass of our Sun, explodes as a supernova. Whereas short GRBs occur when two compact objects such as neutron stars (or a neutron star and a black hole) clash, forming a kilonova. Unlike a supernova that lasts up to a minute, a kilonova lasts hardly just two seconds!

A team using the Gemini North telescope in Hawai‘i and another team using the Gemini South telescope in Chile were looking at GRB 211211A independently, expecting to find a supernova. To their surprise, both teams saw a near-infrared afterglow which is a unique feature of a kilonova, in the same location where the gamma-ray bursts originated. This discovery shows that there’s more to understand about the “origin story” of gamma-ray bursts.

What’s more? The extreme physical conditions in kilonovae produce heavy elements such as gold, platinum, and thorium giving astronomers a new way to study how these elements form in the Universe.

Image: This artist's impression shows a kilonova produced by two colliding neutron stars. While studying the aftermath of a long gamma-ray burst (GRB), two independent teams of astronomers using Gemini North telescope on Hawai‘i and the Gemini South telescope in Chile have uncovered the unexpected hallmarks of a kilonova Credits: NOIRLab/NSF/AURA/J. da Silva/Spaceengine

The twin Gemini telescopes were the first to detect this kilonova in the near-infrared wavelength of the electromagentic spectrum. The heavy elements ejected in the kilonova block visible light but allow infrared light with a much longer wavelength to pass through and only sensitive telescopes like Gemini can detect a kilonova in these wavelengths.

Saturn's Rings Are Warm and Fuzzy