When we look up at the night sky, we see the stars as tiny points of light. But did you know that half these points of light is not one star, but two or more circling around each other!

It is very common for stars to form with siblings, but the stars shown in this picture are the hottest and most massive pair ever spotted so close together.

Usually, sibling stars are quite far apart taking months, years or even centuries to circle around each other. But the two stars in the picture orbit each other in little more than a day. (Remember it takes 365 days for Earth to orbit the Sun).

These stars are also unusually large and hot. When combined, their mass is the same as almost 60 Suns and they are each burning at more than 40,000 degrees! Our Sun’s surface is just 6000 degrees and that’s still hot enough to cause sunburn from 150 million kilometres away!

We don’t often see a pairing like this because it happens very quickly. It’s hard to catch them in the act. Before long these stars will face a catastrophic end in one of two possible ways: as violent supernovae explosions or as an even more energetic gamma ray burst. This picture shows the pair sharing a final hug before meeting their violent end!

So far, all gamma ray bursts we’ve spotted have taken place outside our Galaxy and have been harmless to Earth. However, if a GRB were to occur nearby the effects could be devastating for the planet. 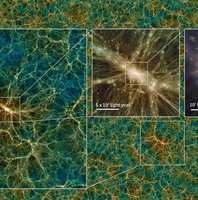