Life can be found almost everywhere on Earth, from the poles to the equator, from the bottom of the sea to the top of mountains, and from dry valleys to the edges of volcanoes. Over the last 3.7 billion years or so, life on Earth has adapted to almost every environment imaginable. But what is it about Earth that makes it so perfectly suited to supporting life? Well, many things, but number one is water.

On Earth we're yet to discover an organism that doesn't need water to survive. For example, the human body is made up of nearly 60 percent water and we can't go for more than a few days without it. Luckily, the Earth lies just the right distance from the Sun for water to exist as a liquid. If the Earth were much closer to the Sun, the oceans would dry up and if we orbited much farther from the Sun, the oceans would freeze.

But, is there water on other worlds? Using the powerful eye of NASA’s Hubble Space Telescope, scientists have just found water in the atmosphere of five distant planets! (The atmosphere is a blanket of gases surrounding a planet, such as the air we breathe and surrounds us on Earth.)

Does this mean these planets are like our home? Unfortunately not. All five planets are known as “Hot Jupiters”. They are hundreds of times more massive than Earth, very close to their star and covered in swirling, fiery-hot gas. These pictures open the door for further investigations into how much water is present in the atmosphere of planets far away from those in our own Solar System, particularly those similar to Earth!

Earth's atmosphere doesn't just contain oxygen. It is mostly made up of a gas called nitrogen and it contains some water. If the temperature in your area is just right, you can see the water clumping together in the air, making fog or even falling out of the sky as snow. 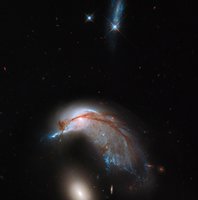