The Universe is everything we can touch, feel, sense, measure or detect. It contains billions of awesome objects including planets, dust clouds, galaxies and star clusters like the one in this photograph.

Luckily for us, this cosmic gem, along with many others, is visible in our night sky with just a small telescope. It’s hard to believe that back in the 1700s one astronomer thought it was something to be avoided!

Charles Messier’s life dream was to become famous. To do this, he needed to discover a comet. (Back then finding a comet was the easiest way to impress other astronomers).

Unfortunately, when Charles looked through his telescope he often found fuzzy objects in the night sky that were already known about (and were not comets). So he decided to save himself some time and each time he found an object that didn’t move across the sky (as comets do), he noted it down.

By the time he'd finished, Charles had accidentally created a catalogue of 110 astronomical beauties; included gassy nebulae, clusters of stars and enormous galaxies. The funny thing is, although he went on to discover 13 comets in his lifetime, Charles Messier is most famous for this catalogue!

This spectacular image is of the star cluster named Messier 47. The cluster is dominated by a sprinkling of around brilliant young blue stars with a few striking red giant stars.

If you want to learn more about the stunning objects in the Messier catalogue, you can play a game of Messier Bingo at lcogt.net/messierbingo/ 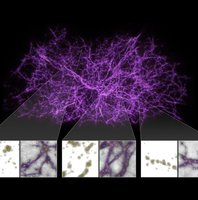 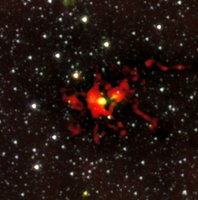