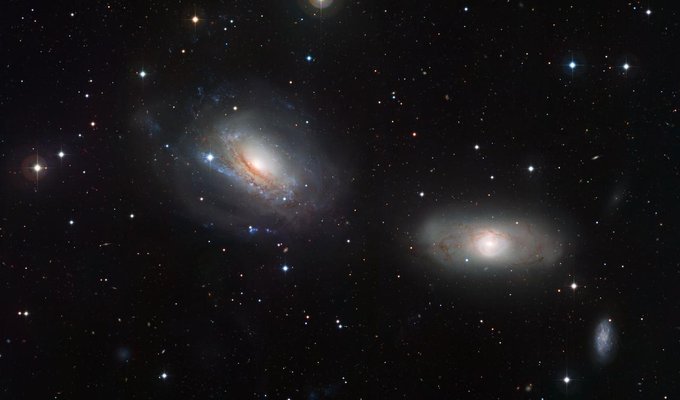 In the Universe, galaxies are usually far apart from each other. For example, you would have to line up 25 galaxies the size of our own Milky Way Galaxy before you reached our nearest neighbour, the Andromeda Galaxy. However, the biggest two galaxies in this beautiful new picture are very close together – the space between them is only about half the size of our Milky Way Galaxy!

If you look very closely, you will see that both of these galaxies have a spiral shape, so they are called spiral galaxies. The long arms of the spiral galaxies are filled with stars and gas, which twirl around the centre of the galaxy.

The galaxies in the picture are so close to each other that they are tugging at each other's arms. This is changing their shapes! For example, the galaxy on the left now looks more like a bright smudge than a perfect spiral. That’s because hot, glowing gas has been pulled away by its neighbour. Slowly, the galaxies will be pulled closer and closer, until they eventually join together and become one big galaxy.

Our own Milky Way Galaxy will eventually combine with the Andromeda Galaxy, but this won’t happen for a very long time – about 5,000,000,000 years!