The curious case of the missing planets around gas and dust rings
Nov. 30, 2021

One of the reasons for rings and gaps in disks of gas and dust around young stars can be forming planets. If this makes sense, then why is it rare to find planets with these rings?

Astronomers just found that after creating a ring, a planet can move away and leave it behind. New supercomputer simulations showed that a planet ‘in transit’ can create lots of patterns we see in the disks of cloud and dust nearby young stars.

The ALMA (Atacama Large Millimeter/submillimeter Array) observed different patterns of these rings and gaps. Astronomers think that the effects of gravity due to planets forming in these disks could be one way to explain these structures, but they are yet to  find enough evidence to confirm this.

A team using the supercomputer ATERUI II at the National Astronomical Observatory of Japan simulated a planet ‘sinking’, or moving away from where it first formed. It left a ring behind it and something curious happened: at first, the ring seemed intact as the planet moved inwards, but then it began to deform until a second ring started forming where the planet moved to. And then the first ring disappeared, only the second ring remaining. Sounds like quite a view!

This helps explain why it is so hard to find planets near the outer rings, or the rings that form first. Now astronomers hope further observations will help them see if these simulations really match reality.

Image: The image shows the simulations by ATERUI II at the top and real-life observations with ALMA at the bottom. At the left, we can see the start of the planetary migration, with the outermost ring of gas and dust forming. At the center, we see the second ring forming and at the right, the first ring has disappeared, only the second remaining.

The first image of a planet forming in the protoplanetary disk is of 2018, when astronomers using the Very Large Telescope (VLT, from the European Southern Observatory - ESO) saw an infant exoplanet, PDS 70b, surrounded by a dense disk of gas and dust. 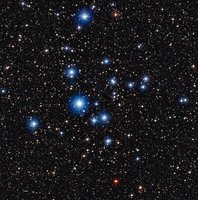