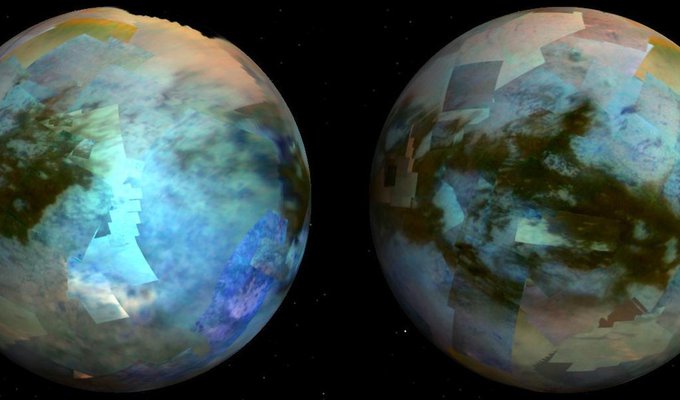 Astronomers have pieced together photos taken over six years to create a fantastic map of the surface of Saturn’s largest moon, Titan. A spacecraft called Cassini, which has been in orbit around Saturn since July 2004, took the photos.

Astronomer Stéphane Le Mouélic explains why it took so long to create the map: “As Cassini is orbiting Saturn and not Titan, we can observe Titan only once a month on average. The surface of Titan is therefore revealed year after year.”

Although Titan is one of Saturn’s moons, it is a much more exotic place than our Moon. Titan is a frozen world on which astronomers think a chemical called methane rains down on the surface instead of water! Titan also has thick clouds of gas, which make it difficult to see what’s hiding underneath. But the Cassini spacecraft has infrared cameras that can see through these thick clouds, allowing it to photograph the surface.

Astronomers had to take the bundles of photographs taken by Cassini and carefully piece them together to create a map – like a jigsaw puzzle! But fitting the pieces of the jigsaw together was difficult, as some pieces were taken when the surface was better illuminated. This meant that connecting pieces in the jigsaw didn’t always look like they belonged together, as one might have been darker than the other. To fix this problem, astronomers carefully adjusted the brightness of each photo.

The map of Titan was released today at an important astronomy meeting held in France, where about 1,400 astronomers from around the world have gathered to share their latest research about planets. Check out our other news stories from the meeting at the bottom of this page.

On January 14 2005, a robotic spacecraft called Huygens landed on Titan – the most distant ever spacecraft landing! Huygens took photos of where it had landed, giving astronomers their first glimpses of this exotic world!