You’ve probably heard the phrase “what goes up must come down”, but have you ever stopped to think about why?  The answer is ‘gravity’.

Gravity is an invisible force that pulls objects towards each other.  Anything that has mass has gravity. Mass is basically how much material something contains. The more mass an object has, the stronger its gravity is.

Some of the largest things in the Universe are galaxies. They are enormous groups containing billions stars, planets, cosmic gas and other stuff.

Despite the huge distances between galaxies their powerful gravity is always at work. It makes them pull at each other and often leads to collisions.

This picture shows a colourful but oddly shaped galaxy. The peculiar shape is because this is not one galaxy, but two. The pair have been crashing together for millions of years. Pulled together by gravity, they are slowing merging together to form one larger galaxy.

Almost every galaxy will be the victim of a cosmic collision at some point. This could mean that two galaxies crash into one another, like the galaxies in this picture.  Or they might just pass close by each other, allowing gravity to pull each galaxy into strange shapes.

Our own Galaxy has a long history of collisions with others. It contains bits of many smaller galaxies that smashed into it in the past. In fact, a nearby dwarf galaxy is merging with our Galaxy as we speak! 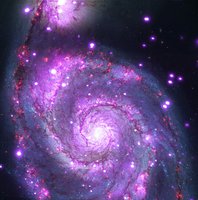