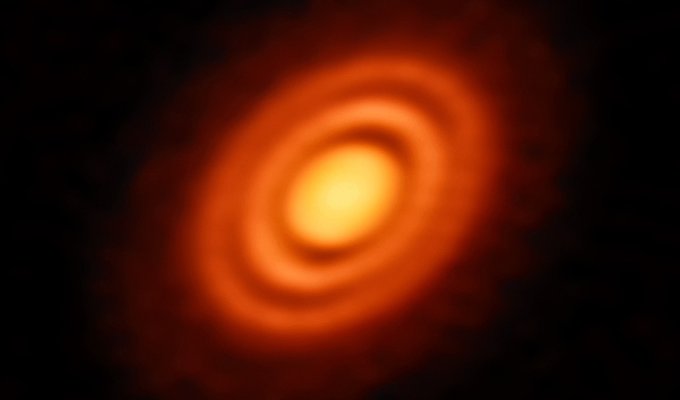 Some seriously clever techniques have been invented to hunt down alien worlds. Watching for wobbling stars and dimming stars are two methods for revealing unseen planets. But to find the youngest planets scientists have had to go back to the drawing board.

Young stars are surrounded by thick discs of gas and dust, making them ideal planet-forming factories. After all, planets are made when small bits of gas and dust clump together, growing larger and larger until a planet is born.

(When do they stop growing? Well, the smallest planet we’ve found so far is about the size of our Moon, while the largest is 28 times wider than Earth!)

But the gas and dust around young stars hide any newly-made planets within. To uncover these planets a brand new technique was needed, one that allows us to peer through into the dust. So, scientists have created one!

The gas around stars moves in a very simple and predictable way…unless there’s a planet involved. Planets cause unusual movements in the gas, a bit like whirlpools you see in a river as water moves around a rock.

By carefully studying the movement of gas in the dusty shell surrounding a star 1,000 times younger than the Sun, three planets were discovered. This is the very first time we can say with certainty that we’ve found planets around such a young star!

The new technique is similar to the way the planet Neptune was discovered. The planet Uranus was spotted moving in an unusual way. It was being pulled out of its normal orbit by the gravity of an unknown object. By taking very careful measurements of Uranus and using some complex maths, Neptune’s location was discovered. It wasn’t until later that Neptune was seen directly.