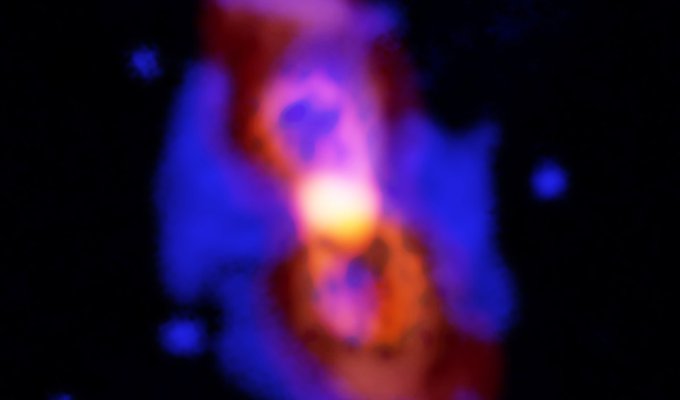 We’ve all heard of radioactive material, it turned Dr. Jon Osterman into Dr. Manhattan and unleashed the Incredible Hulk.

We are all exposed to small amounts of this type of radiation every day. Rocks, glass and even bananas are naturally a little radioactive (not enough to be harmful). Radiation is often used in hospitals to diagnose and treat illnesses. And, of course, hundreds of thousands of tons of harmful radioactive waste are produced by nuclear reactors each year.

The space photograph above might look like a fuzzy blob at first glance, but you’re looking at the remnant of a spectacular cosmic collision.

Many years ago, two sun-like stars crashed together, hurling material into space (shown in orange) and leaving behind a brand new star. The explosion was bright enough that it appeared as a bright new star that was visible in the night sky for several months.

It is incredibly rare for stars to collide, but there’s another reason this event has astronomers excited — the glowing material surrounding the star contains radioactive material!

This is the first time radioactive material has been directly detected in space. It is a radioactive type of aluminium, similar to the material used to make everyday items like foil, CDs and bike frames.

Our galaxy contains about three Suns’ worth of this type of radioactive aluminium. These new observations tell us that at least some of it was produced during star collisions. However, only a small amount of aluminium was spotted around this object, suggesting there’s probably a second source still waiting to be found.

When radioactive materials emit radiation, they become completely different chemicals. Radioactive aluminium will eventually turn into a chemical called magnesium, which is found in some foods and plays an important role in keeping our bodies healthy.

Beaming with the Light of Millions of Suns