How many cosmic objects can you name in 10 seconds?

Did you get any of the following: planets, moons, stars, galaxies, asteroids, comets, satellites, nebulae, black holes?

All these objects, everything on Earth, everything ever observed with all of our tools and instruments – makes up less than 5% of the Universe.

The rest of the Universe is made of two very mysterious, invisible materials called ‘dark energy’ and ‘dark matter’.

Dark matter doesn’t shine like stars, reflect light like planets, or even absorb light like cosmic dust. We can only detect dark matter through its affect on other objects, such as spiral galaxies. Like the wind on a winter’s day, you can’t see it but you can see how it makes things move around.

Like the moon and planets, spiral galaxies spin, although it takes them hundreds of millions of years to do so.

We would expect that stars at the outer edges of these galaxies would move much slower than stars closer to the centre. In the same way that planets further from the Sun move slower than those in the inner Solar System.

But because of the large amount of dark matter in nearby galaxies (including the Milky Way), the outer edges of these galaxies move faster than expected.

However, astronomers have just found that when the Universe was young this wasn’t the case. When looking at ancient galaxies they found that their outer edges moved more slowly than regions closer to the centre.

This tells us that the first galaxies didn’t contain as much dark matter as those we see today. In the early Universe, galaxies were mostly made up of normal material; like stars, cosmic gas and planets. Whereas galaxies today are dominated by invisible dark matter. 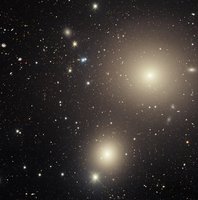