From Starlight to Twilight: A Friendly Vampire Star!
Dec. 7, 2011 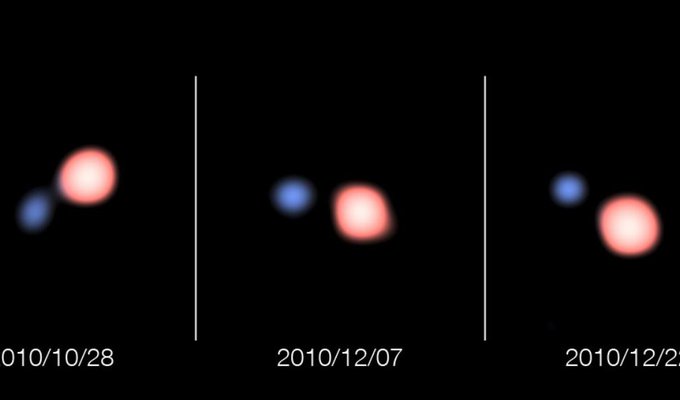 Astronomers have taken the best photos ever of a star that has lost most of its material to a vampire star!

This picture shows the positions of a large star (shown in red) and the ‘vampire’ star (shown in blue) in photos taken about 1.5 months apart, as they orbit around a common point.

The centres of the two stars are separated by only a little more than the distance between the Sun and the Earth. (For comparison, the Sun and its nearest star are separated by about 870,000 times this distance!). Because these stars are so close together, the vampire star has already eaten about half of the mass of the larger star.

“We knew that this double star was unusual, and that material was flowing from one star to the other,” says astronomer Henri Boffin. But the way that this is happening is different to how astronomers had expected.

The new observations show that the larger star is a bit smaller than astronomers had previously thought. This means that it isn’t big enough to fill the gap between the two stars. In fact, it is only wide enough to fill a quarter of this distance. This makes it much more difficult to explain how the star lost material to its smaller companion, as the vampire can’t reach its victim!

Astronomers now think that, rather than being bitten by the vampire, the larger star actually voluntarily throws away some of its material. The smaller companion star then just eats whatever comes its way – like a friendly vampire!

Some double stars complete one orbit around a common point in less than a day, while others take thousands of years!